How far is too far? 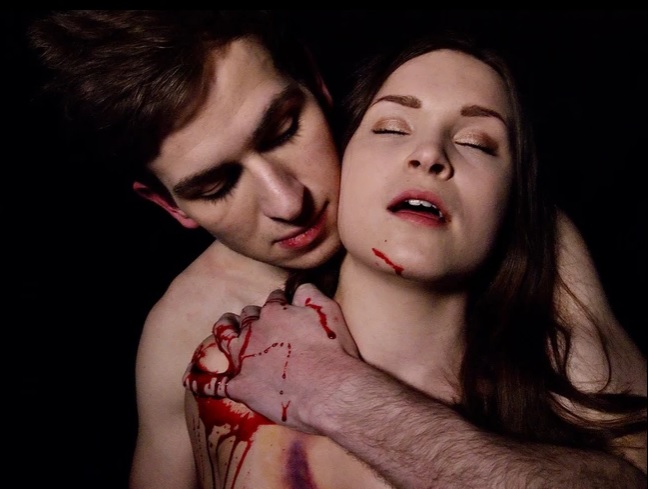 Primrose Path is Mannequin Mouth's first recorded theatrical production, catered to viewers specifically to watch from their own home, thanks to the cinematic style of filming. Not for the faint-hearted (18+), this production provides 90 minutes of raw emotions; sensitive content; disturbing conversation and lots, and lots of fake blood. But don’t let the heavy trigger warning put you off this production because the minimal set and trio of actors are able to fill the space with energy and authenticity, making this is a really captivating and thrilling piece of theatre to watch.

Bound by their mutually unconventional desires for a relationship, Chriss (Laura Jackson) and Damon (Michael Hogg) have sexual scenarios that play out in a number of ways. The mention of torture, unconsented sex and use of weapons are among the many activities that they perform on each other to keep their relationship exciting...Or some may say deadly.

Their consistency and delivery of this compact script are to be commended, with special mention to Jackson for her commitment to playing the intense role of Chriss. Her character is in a constant battle of controlling and being controlled, beaten and bruised, and yet beating and bruising Damon too. A line that Jackson’s character delivers beautifully is: ‘Our scars bind us together’, but we cannot help but feel she is romanticising their abusive and toxic habits. Perhaps it is because they are just as bad as each other, that we can tolerate their horrifying behaviour towards each other, or at least more so than if it were to be one-sided. And really what is being shown here is a dramatised theory that love and hate run on a fine line.

India Howland and Will Pinhey’s direction keeps the energy and pace of the script alive, specifically by executing the proximities to fit the characters' motivations in the small space, as well as making the audience members feel included in this dysfunctional relationship. It becomes a pattern that only when their lives are at stake can they become vulnerable to how they feel for one another, for example, only seconds before potentially pulling the trigger that could kill Damon does Chriss quickly mutter ‘I love you’. Do they love each other? Well, I hope others would agree this is not love. Pinhey is also to be recognised for the scriptwriting, as it is cleverly littered with reoccurring language that perfectly frames these characters' manipulative motivations.

If you are searching for a thrill-seeking piece of theatre, with high-end acting, this is defiantly a show to watch and I hope to see many more shows by Mannequin Mouth in the future. Please read the trigger warning before it begins, and contact services if you believe to have experienced domestic abuse.

You can watch the show here