Into The Woods - Review - The Cockpit Theatre

The revival of Sondheim's musical at the Cockpit 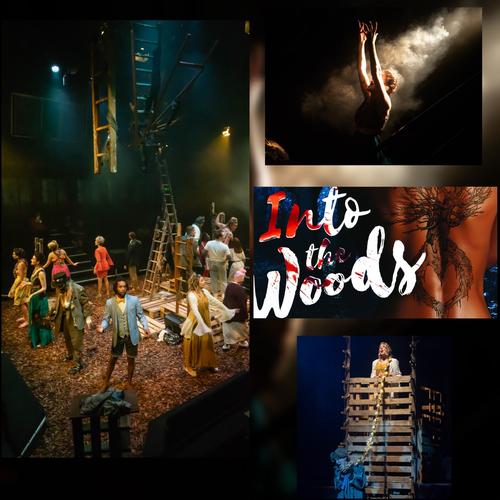 Into the Woods is a musical with music and lyrics by Stephen Sondheim and book by James Lapine.

It opened in New York in 1987 and had many revivals since.

The musical connects different fairy tales, exploring the consequences of the characters' wishes and decisions. The main ones are taken from "Little Red Riding Hood", "Jack and the Beanstalk", "Rapunzel", trying to escape her confinement and "Cinderella", looking for her prince, as well as several others. At the centre of it, there are a baker and his wife, who desperately want a child, but they have been cursed by a witch.

The events and their unpredictable twists are told by a narrator – in this version Jordan Michael Todd. His performance is very good.

The cast of is made of 17 (and a band of 5) and the stage  well designed gives plenty of space to the actors to move around and make the continuous entrances and exits. It is an immersive production, and I felt like trapped as the characters onstage.

It is indeed good the idea of giving a background to the different characters -  especially Jack and his mother (Jamie O’Donnell and Madeleine MacMahon) as Glaswegian and adding enough humour, although some of it is related to TV shows and I probably could not get it.

The songs are comic and romantic – like the beautiful Agony, but the singing is not always consistent.

Even if Into the woods is a popular musical, I found it confusing and neither inspiring nor moving. Nevertheless, a bravo to all the ones involved in this fresh, dark and energetic production.