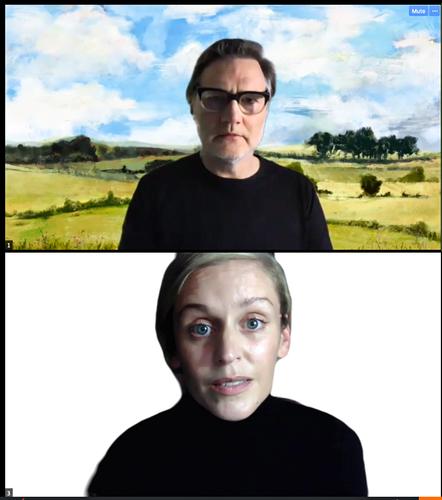 During this uncertain time, the public have been provided with many different ways to still enjoy the arts. From the National Theatre at Home's weekly productions, to Andrew Lloyd Webber using YouTube as a platform to show some of his filmed productions every weekend, Theatre during Self Isolation has had to change to spread the joy it gives. With 'A Separate Peace', a new self isolation style has reared its head, and this style could become a promising development during the Theatre shutdown.

'A Separate Peace' is a play by Tom Stoppard, directed by Sam Yates. An impressive feat of technology, this was the first Live Theatre performance to use the cloud meeting rooms, Zoom, as a platform. Overall, the performance was enjoyable, but part of the story felt a little lost. The problem was, it wasn't possible to work out if the missed story elements were from the writing, or from distractions of watching a performance on Zoom.

The actors of the piece were fantastic, with a strong cast made up of Jenna Coleman, David Morrissey, Ed Stoppard, Denise Gough and Maggie Service. However, the use of Zoom's green screen technology provided some distractions with the cast being left in weird shapes, and at points, parts of their bodies missing. This problem, for some reason, didn't occur with David Morrissey's screen.

This production was an acted out reading of the play. However, to create fewer distractions and engage the audience, the scripts should either be at eye level of the camera, or the script should be learnt. There were many points of actors looking down slightly at their scripts, which distracted slightly from their amazing performances. If productions in this way are to be a success (and I think there is a very good possibility they will), these few adjustments will make the production on a whole feel more personal for their audience.

As a concept, live productions such as this could be the way forward to enable theatre to thrive during the lockdown. With the incredibly difficult technical elements of this style of theatre addressed with a bit more polish, this platform could make live theatre accessible to the masses in a totally new way.