A very unlikeable character is at the centre of this play 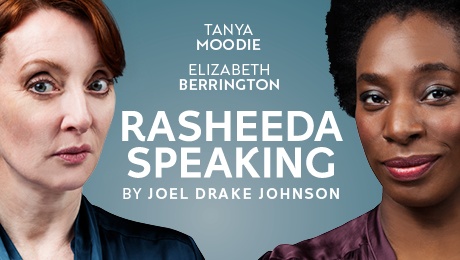 Jaclyn (Tanya Moodie) is a secretary in the office of Doctor Williams (Bo Poraj) and works with Ileen (Elizabeth Berrington).
One day, the Doctor raises some concerns about Jaclyn’s work and asks Ileen to control her – basically to spy on her. From this point, things will go quickly out of control.


Rasheeda speaking is a comedy drama that takes the title  from a monologue that Jaclyn does towards the end of the play, when she tells to Ileen that every day there is a group of white men in the bus who call all the middle age black women Rasheeda. It is a nice moment of the play, and it is touching.

The comedy is well paced, with some funny moments and a great acting. Tanya Moodie is excellent, and so Elizabeth Berrington, who goes from being a perfect colleague to a scared-to-death woman.


I don’t think this is a play that talks about racism and the trajectory of the story – that takes the audience to empathize for Jaclyn and antagonize with her colleague and the doctor - was not believable for me, as the dialogues in the final part.

The script implies that Doctor Williams wants to transfer Jaclyn because she is black. But Jaclyn is a woman who treats patients without respect, who lies all the time, swearing on the Bible, who is racist towards her Mexican neighbours, who has anger issues, who talks all the time and makes comments about her colleague and the doctor. So, at the point where the racial speech about Rasheeda arrives, I was so disliking her character that I was actually hoping she was fired. I don’t know you, but I could not resist one day in a office with someone like her.

And no matter what the colour of the skin is.