Masculinity and strenght in our society 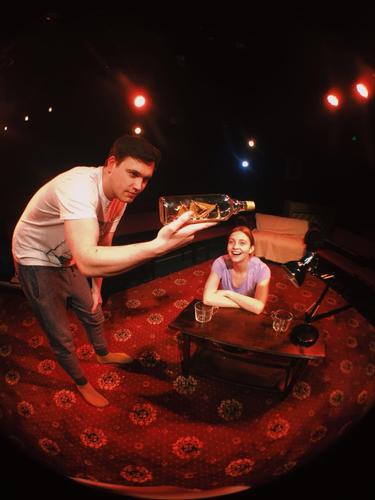 George (Nick Cope) and Hatty (Felicity Green) are neighbors and friends with benefits.

One night, at 4 AM, George wakes up Hatty because he thinks there is a leak on the ceiling. But is there really a leak or George’s mind is making things up?

I was very interested about seeing this play because the writer’s (Jenna Kamal) note points out how masculinity is related to strength in our society and that suicide is the UK’s biggest killer of men under 45.

But I did not see much exploration of that in the 60 minutes of the play.

After George calls Hatty to check the leak, they start a conversation about their relationship, their personalities, their life, about London (the most interesting part – about feeling lonely in a hard big city like this one) and much more. The dialogue is brilliant and funny in some parts, in others less clear (why George and Hatty became distant? It is related to George’s depression?). The actors (both very good) give depth to the characters so it was not difficult after a while to empathize with them.

If this is – as written before – a play about depression and the perception of strength and masculinity, I did not find a lot about the subject, except maybe in the very last few minutes. But for a play that has a short length, such a powerful theme should not be relegated at the end of a conversation that – even if intelligently written – could have given a more robust insight into this dark problem.