An immersive production about that feeling of helplessness and being trapped 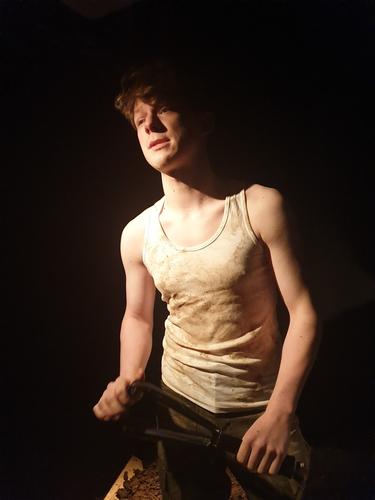 Fever Dream Theatre presents a 45-minute immersive piece set in an underground tunnel. On approaching the shipping container that was to act as the stage, the audience prepared to feel trapped, trialled and traumatised. The dimly lit space was just enough room for two actors and around six audience members to breathe comfortably, a very close encounter, indeed. The interaction between spectator and actor varied. At moments one witnessed two acquaintances digging for their lives as though they were a ghost presence intruding on the performers but within the next, the digger's stories were being told to the audience with direct eye contact.

Christophe and (Gwithian Evans) and Tom (William McGeough) read the script like a textbook; non-fictional, unimaginable and impersonal. For such an intimate space, it was impressive how distant the audience could feel from these characters. The set up was an agonising ordeal, inspired by genuine historical escapes, yet the delivery was nonchalant.

Written and directed by Jonathan Carr, the script and embodiment of, is ambiguous throughout. Clearly attempting large chunks of metaphorical prose with no character nuance to cement it, the performance begins to feel like a sermon, preaching big ideas that are far too vague to be communicated successfully. Unfortunately, this meant the characters themselves lacked humanity and connection. In theatre, there tends to be a little red flag whenever a monologue (or in this case two monologues disjointed and smashed together) is in the past tense. It sometimes has a tendency to feel as you are a witness to...Well, not much. Where is the drama if it has already happened? Where is the tension?

As a result, this production missed multiple opportunities. The immersion and the space are fantastic, just the idea of being closely confined usually would incite fear or excitement, perhaps it was a mistake to attend under these false expectations. The only criticism of the venue and space itself would be the inability to properly soundproof. While the script contained several allusions to the silence and the weight of being choked by loneliness so deep under the earth, people cackling and trains rumbling just metres away destroyed the depth of feeling those lines and that space was presumably supposed to give.

Without a clear throughline, many unanswered questions and blurry character development, this Vault's festival novelty might just bury its head, unless you're prepared to dig very deep to find the profundity it struggled to convey.

It runs until 22 March