The unforgettable theatrical tour-de-force is back 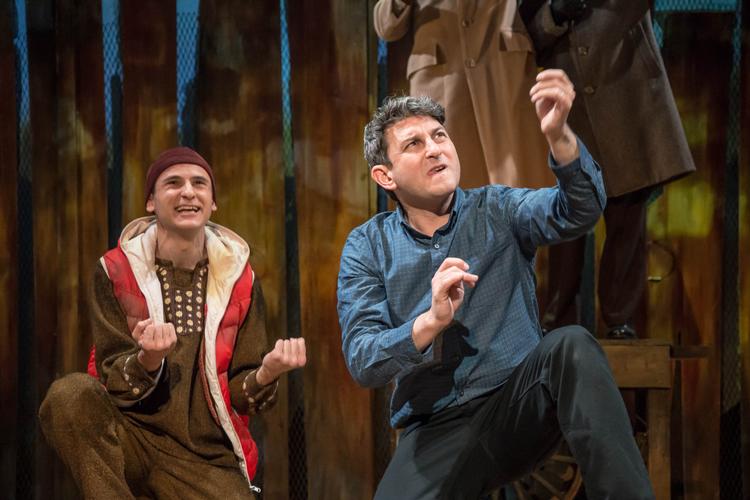 Khaled Hosseini’s international best-selling novel is brought to life in this perfectly performed production of The Kite Runner.

It’s a haunting tale of friendship and betrayal, childhood innocence and redemption and manages to conjure up all sorts of feelings inside.

We’re in Afghanistan, it’s the mid 70s and all appears tranquil. We meet Amir (David Ahmad). Well we actually cleverly meet both of him, the adult version who acts as a narrator and his child version. There’s something quite fun in watching him move on set in a second to flit between the two changing his voice instantly to make the distinction.

Amir is Pashtun while his best friend Hassan (Andrei Costin) is a Hazara boy, the son of the family’s servant Ali (Tiran Aakel). They do everything together and despite the differences in their social standing Amir never treats him differently. They play, they read, they tease each other, look after each other and have fun – the most fun they have is when their flying kites.

And it’s this favourite activity of theirs that changes everything, the catalyst to that bond being broken forever.

Amir betrays Hassan who has been the loyalist friend he could have ever have had. Riddled with guilt he then tries to frame him for stealing in the hope Hassan will be forced to leave the family home and Amir will no longer have to be silently reminded and tortured by what he didn’t do. He knows he should have stopped the bully Assef (Bhavin Bhatt) but he doesn’t understand why he didn’t.

But then there’s political tension and Ali decides it’s time to go. There’s a goodbye scene and you wonder why Amir’s father, Baba (Dean Rehman) is so distraught at them leaving. But then again, Ali has been in the family for decades.

It’s only later that you find out there was more to this than meets the eye.

Not long after, Russia invades Afghanistan and Baba and Amir take a suitcase each, leave the country and make a new life for themselves in San Fransisco. It’s only when Amir has to go back to the continent as an adult that secrets are revealed triggering his attempts at confronting his past, making good of the bad he did, and being the person he should have been all along.

It’s always going to be hard to manage people’s expectations when you’re adapting an international best-seller for the stage, but this show has already had two acclaimed West End seasons and it’s not hard to see why.

It’s playful when it needs to be, serious when it has to be, general when it’s just bubbling along and moving as it all unfolds.

And taking us through all these ups and downs is Hanif Khan, the live tabla player sitting quite prominently on stage, who starts and stops playing precisely on certain words or pausing for key phrases or dramatic moments.

This play has previously been described as unforgettable and it’s clear that the playwright Matthew Spangler has put in so much effort to make his adaption so authentic. It’s so successful that it’s like a real tribute to the original work, and if you’ve read that, then you’ll understand why this show really is unforgettable.

The Kite Runner is currently playing at Richmond Theatre until March 14 and there are still tickets available. It’s also part-way through a tour of 16 towns and cities across the UK.