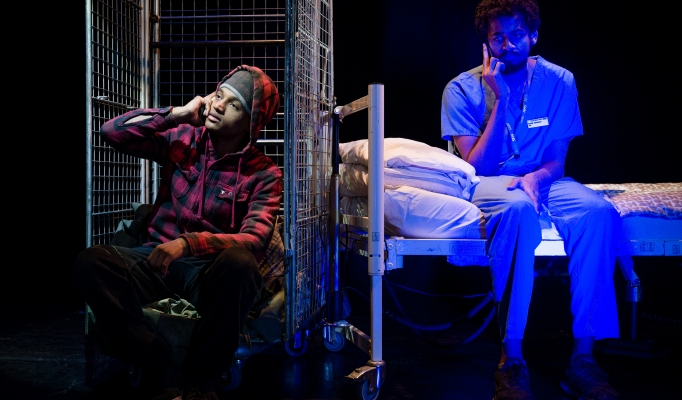 The fifth production from Pipeline Theatre, and writer Jon Welch, Drip Drip Drip tells the tale of an NHS pushed to its absolute limits – this time not by Conservative budget cuts, but by testing the fundamental principle of care for absolutely everyone regardless, when a team of immigrant doctors and staff find themselves compelled to make a dying Nazi apologist comfortable.

It’s a play firmly in the urgently political, meta-theatrical tradition of Bertolt Brecht, merged with the visceral social realism of Jim Cartwright, and the resulting explosive combination produces sincere excellence so outstanding that it almost transcends theatre and becomes a witnessed experience of life itself.

Welch’s extraordinary, meticulous writing is full of real life, shining lyricism, inexhaustible dynamism, and an abiding empathy and love for all of humanity so acute that it feels autobiographical – something made even more remarkable by the fact that Welch is a middle-aged white man with a life nothing like the characters he so perfectly imagines in his work.

The first-rate writing is carried by the work’s other greatest strength, a superb professional cast, all of whom perform flawlessly, and bring everything to life so recognisably that all awareness of the artifice of theatre seemingly disappears, with the audience liable to be left feeling less as if they are watching a play, and more as though they are stealing a shameful, perverse look through a window, into real, suffering peoples’ wretched lives. It seems that Welch has not merely written characters, nor are the cast simply playing parts – but that they have brought genuine human beings to full and vivid life, as all great writing and performance should.

One could easily meet any of these wonderfully-realised people on the street, let alone see them in a theatre play. David Keller is superb as the rambling, scatter-brained academic facing death as a disgraced Nazi sympathiser; Alan Munden totally convinces as the hospital porter who could be any oddball full of nasty little prejudices towards every sort of othered person, whether he means to have them or not; Lydia Bakelmun perfectly embodies the horrendous strains of professional and personal life both as a Muslim doctor and as a woman of colour; and at the true heart of the work are Girum Bekele and Michael Workeye as two loving brothers, struggling refugees torn apart by cruel happenstance, who together send the work hurtling towards its utterly heartbreaking finale, in which one struggles not to weep bitter tears of righteous indignation and fury at the sheer damned inhumanity. There are not enough superlatives for it all.

Ably assisting all this brilliance is the set design of Jude and Alan Munden. Visually sparse in a suitably Brechtian way, allowing the focus to fall on the excellent performances and writing, it nevertheless proves versatile for being so compact, and capable of its own visually striking performances. Some clever use of projection also aids the sense of place and character nicely throughout.

In all, a simply superb production. Flawlessly performed, powerful, righteously angry, poetic, and emotionally devastating. A spectacular tour-de-force that demands to be seen and heard. Do so.