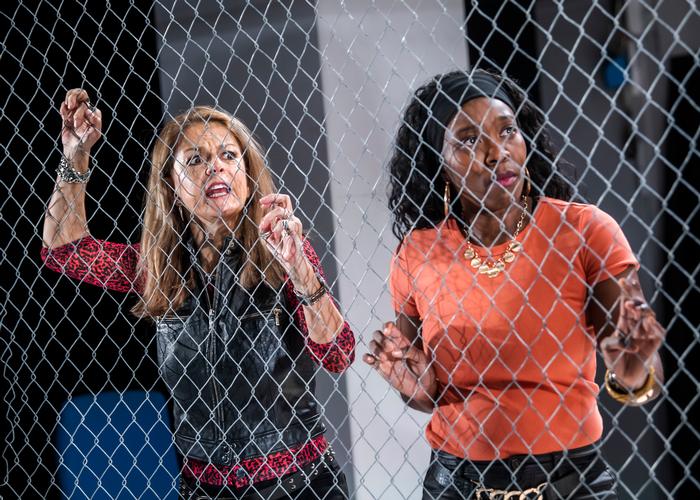 This is a brilliant satire served with a chilling dose of real-life stories of men and women torn apart from their families and deported back to the UK from the US while serving prison sentences.

Cocaine, drinking under the influence of alcohol, a forged cheque and even murder – it doesn’t matter what the crime is because this play is designed to highlight the harsh brutality of America’s Immigration and Customs Enforcement agency, also known as ICE.

Across the Atlantic Donald Trump hit the headlines with recent deportations and it was same here under Theresa May’s leadership and the Windrush generation scandal. And even though deportations have been taking place since 2003 when ICE was created under the Bush administration this emotional, powerful and gritty play is as relevant now as ever.

It starts on a plane bound for Heathrow and we meet Anne (Amrita Acharia); Clodine (Moyo Akandé); Nikol (Yvette Boakye); Kathy (Miranda Foster); Patrick (Fergal McElherron); and John (Duncan Wiseby) and find out snippets of their lives and why they ended up in prison and on that flight. They’re accompanied by an ICE officer played by Nicholas Beveney and he fits the role so well with his height and build and huge stage presence.

As the play progresses you’re drawn into their lives, wanting to know more but hurting for them at the same time. Yes, they’ve done something wrong, but it’s their stories of how they were separated from their loved ones that get you in the end.

But let’s not forget this is also a satire and amongst all of this pain there’s comedy running all the way through it.

You have the serious ICE officer who every now and then breaks into a song and dance, you have John who puts on a cap and is transformed into the handwaving Donald Trump, Kathy who gets a wig and becomes a dancing Theresa May, and Patrick who throws on a builder’s hat to become none other than a bumbling Boris Johnson. Their impersonations were absolutely spot on and hilarious. The audience was lapping it up.

And if you’re a lover of shows on Netflix then you might also recognise a few musical numbers that were played in some scenes with prisons and deportations being the themes of both - Orange Is The New Black and El Chapo. Again, another nice touch.

The Special Relationship has been written by the award-winning playwright Hassan Abdulrazzak who has used interviews with ex-prisoners and immigration experts to carefully craft this together and all the hard work and effort that would have gone into that shows on stage.

The set for this show at the Soho Theatre is as simple as can be – chairs, a revolving circle in the middle of the stage and two barriers. But that’s all it needs to be because this is about people and their stories and it works.