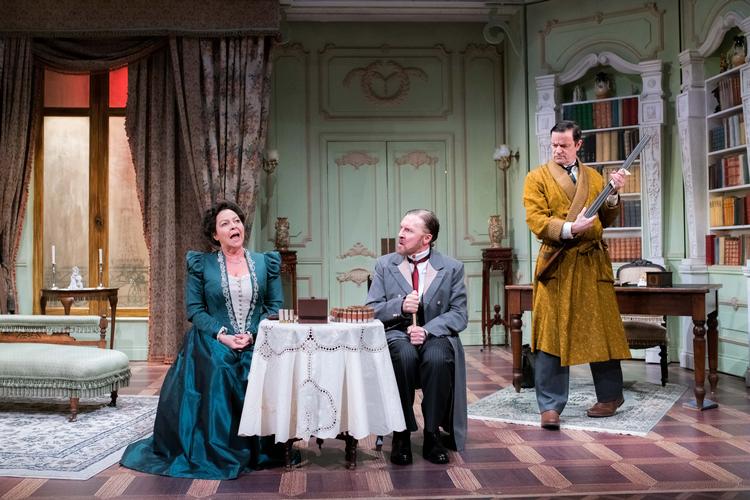 Recently revived from its brief slumber after a 2017 run at the Mercury Theatre in Colchester, Fawlty Towers veteran John Cleese (yes, that one) brings his debut farce to Guilford’s Yvone Arnaud. Cleese’s first scriptwriting foray, bearing all the hallmarks of heavy boyhood influence from French satirist Georges Feydeau, adapts the playwright’s little-known French farce Monsieur Chasse – and does a suitably bang-up job.

Leading lady Leontine (Tessa Peake-Jones) becomes convinced her husband Duchatel (Tony Gardener) is having an affair, and determines to enact revenge by carrying on a torrid tryst herself with her secret lover, the family physician Moricet (Richard Earl). Naturally, hilarious chaos ensues between all the members this dysfunctional 19th-century French noble family as the Monty Python star’s exuberant first-rate writing crackles with characteristic Fawlty-esque wit, ingeniously filtering French farce through all the Cleese classics of British comedy whilst a hugely talented ensemble cast of performers bring it all to endlessly watchable, laugh-out-loud (larger-than) life.

Under the close eyes of writer John Cleese (yes, that one), and skilled director Daniel Buckroyd, the relentlessly fast pace is pitch-perfect, and comic timing is drilled to near-flawlessness, with nary a dull moment to speak of. This is a suitably lavish and elegant production, too, with designer David Shields outfitting every superb performer in beautiful costumes to tread the boards of his extraordinarily comely and cleverly-designed set, with cast and crew ingeniously conniving to distract our attentions whilst the setting quietly shifts and changes.  So much the better for it that this cast has seemingly boundless energy and enthusiasm for their work, with all of their performances soaring to wonderful heights of comic flamboyance, down to each and every part – from Daniel Burke’s delightfully mischievous Gontran to Vicki Davids’ sly Babette, and all in-between, and beyond - especially the wonderfully entertaining turn from Wendi Peters as Madame Latour, whom proves a woman of many talents.

A spectacular production, limitlessly lively, joyful, and funny, and above all, tremendously entertaining. A French farce Fawlty Towers for everyone fond of theatre, that earns a resounding bravo to Monsieur Cleese (yes, that one).

To check the dates of the tour www.bangbangtour.co.uk