Intrigue, corruption, lust and the thirst for power collide in a 17th century Italian court 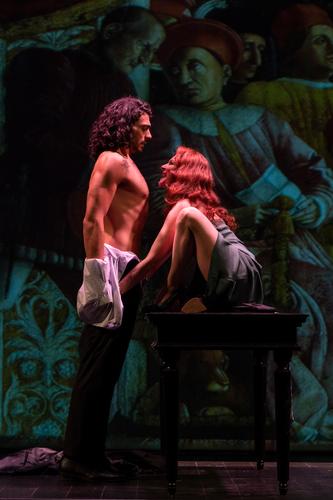 A grotesque dance to the sound of an upbeat Latin American song animates the stage, parading all the characters that we’ll get to know during the play, in something that recalls the macabre opening of the Italian movie The Great Beauty.

Intrigue, corruption, lust and the thirst for power collide in Cheek by Jowl’s first Italian show. Seeking retribution for the murder of his fiancée by the Duke, Vindice (Fausto Cabra) is drawn into a terrible helter-skelter of punishment that throws his very identity into crisis. Written by Thomas Middleton (Shakespeare’s contemporary) at a time of growing social unease, the play confronts us with a government embroiled in shady affairs and a society obsessed with money, social status and fame. Sounds familiar? I fact, it is so familiar that the transposition into Italian and into modern times is seamless, perfectly suited to both 1606 (the year of the first performance) and 2020.

Created by director Declan Donnellan and designer Nick Ormerod for Milan’s renowned Piccolo Teatro, The Revenger’s Tragedy is beautifully performed by a charismatic ensemble of Italian actors, in a great production that mixes tragedy with satire, as it should be. Characters dwell in a world consumed by power, lust and self-interest, and they all bear ominous names: Lussurioso (meaning lustful - a great Ivan Alovisio), Supervacuo (ultra-shallow, Christian Di Filippo) Ambizioso (you can guess that - David Meden).

Cast are all brilliant: the Duke (Massimiliano Speziani) is so perfect he could have headed an Italian government in the noughties. Pia Lanciotti delivers not one, but two strong, moving performances as the Duchess and as the mother of Castiza (chaste, Marta Malvestiti), Vindici (the avenger) and Ippolito (Raffaele Esposito). So powerful and accurate that she is almost unrecognisable as she seduces Spurio (the bastard son of the Duke, Errico Liguori).

The play is extremely entertaining from beginning to end, perfectly paced. The adaptation into Italian is particularly successful, although a non-Italian speaker might miss a lot of the nuances of the passion it conveys, and some of the comedy (although obviously the show is subtitled). Still, a night of great entertainment that is not to be missed, whether you’re Italian or not.