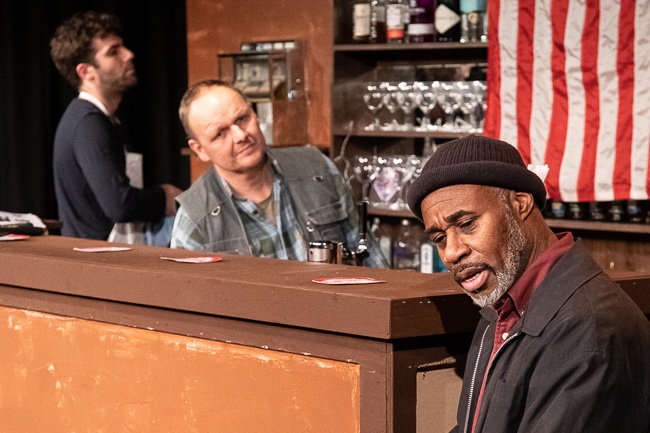 Hot on the heels of its critically-acclaimed West End run, the Tower Theatre have seized the first opportunity to stage Lynn Nottage’s timely, Pulitzer Prize-winning period drama of the endless urban war between class and capital, and its countless civilian casualties.

In the rural rust-belt town of Reading, Pennsylvania in the year 2000 (readers of a certain age, perhaps sit down - 2000 qualifies as period drama these days), its community and people are caught in the ruinous hurly-burly of de-industrial revolution as the steel-work industry begins to collapse. Over the course of the play’s series of inter-connected vignettes, industrial strike action fractures the social landscape, and over the cruel course of time tears friends and family apart, poisons minds, and leaves lives ruined.

Director Ian Hoare directs the unfolding tragedy almost reverentially, clearly having a great admiration and respect for the material. Under his careful, light-touch stewardship, things move along at a good pace, and tension builds and maintains itself nicely throughout, with the sense of time and place reinforced by the Tower Theatre’s by-now customarily excellent set design and use of sound to enhance their dramas. One practically steps right into an all-American watering hole on entering the theatre with Wendy Parry’s set, and the clever deployment of faux radio recordings to frame the vignettes carries us through the surrounding politics of the turn of the century, thanks to sound designer Laurence Tuerk.

A strong ensemble plays out the tragic drama, with the entire cast putting in earnest and impassioned performances. It is an unfortunate hindrance to this production, though, that much of the cast seem to focus rather too much on putting on a convincing American accent, robbing Nottage’s superb writing of much of the import of its dialogue as the performers seem to be too distracted by this requirement to focus on really characterising the text. Especially in the first half, this comes across to the detriment of the production’s believability overall; but when more confident cast members, who have mastered their accent work, can put aside that worry and get on with the performance, the work is wonderfully heightened, and its brilliance shines through.

This is especially apparent in the second half, when curtain nerves have subsided, and genuinely harrowing drama powerfully plays out on its own merit, elevating the production to fantastic heights once again. It can make for a somewhat uneven presentation, but it is hard to begrudge this of a talented amateur company bravely tackling West End fare so soon after the end of its recent run.

Nevertheless, it makes for a bold and compelling night of theatre, and a perfect second opportunity to see it away from the West End.

It runs until 7 March.