How can one couple navigate their shared history when their memories don’t match up? 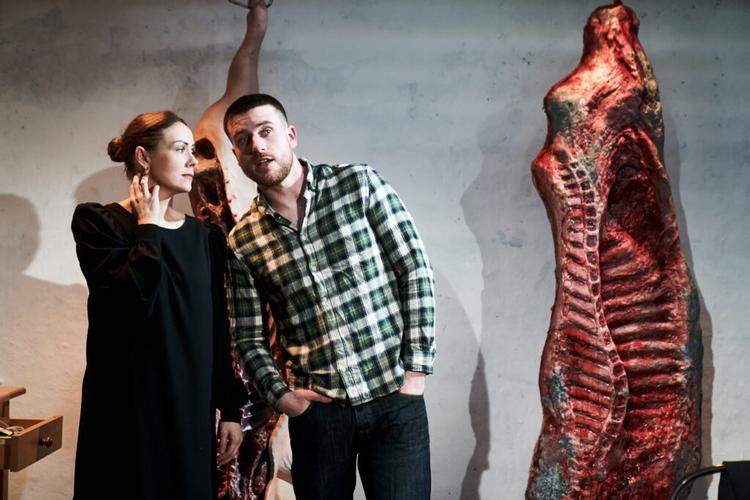 A vegan goes into a meat restaurant... sounds like the start of a bad joke doesn’t it? But there’s no joke here, quite the opposite. Max (India Mullen) has come to see her ex-boyfriend Ronan (Sean Fox) and finally, confront him about the sexual abuse she suffered many years ago.
Instantly there’s an underlying sense of uncomfortableness from Max: she’s on edge and Ronan can’t quite work out why. As more wine is poured and the guards are let down, Max eventually confronts Ronan about the horrible past she so desperately seeks closure from.

In terms of acting, there’s nothing that can be faulted. It’s a masterclass in acting from Max, Ronan, and waitress, Jo (Elinor Lawless) who begins as a comedic addition but throughout becomes integral to the show. The trio journey through a cycle of every possible emotion: quite remarkable, considering the short space of time.

Its dry humour makes it comical but quickly changes to sheer uncomfortableness that makes it harder to watch.

What makes this such an impressive show, is how invested the audience are with the story and characters that you nearly fail to look around.

Rachael Stone’s set design is a joy to look at, with an abattoir feel at the back and a modernised restaurant at the front; a pig cut in half and rotting meat in the background should be your focal point, yet you’re fixated on the trio and the story unfolding in front of you.

Gillian Greer has written a play that’s timeless. It’s brilliant, it’s bold, it’s come at the perfect time and it’s just what we need. With the recent news of Harvey Weinstein’s long overdue arrest, plays facing the tough subject of sexual abuse are becoming even more relevant now and more need to be shown.

It runs until 14 March