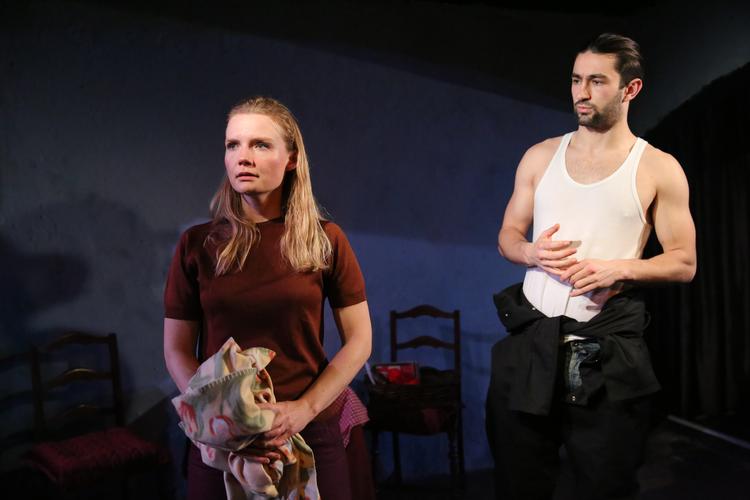 We’ve all probably stayed in a hotel where we’ve counted the seconds down till we could leave. Be it dark, dingy or all together eerie so you’ve been reluctant to spend the night. The same goes for Clare (Sheena May) after she spontaneously takes a trip to the Cornish coast to visit her husband and stay at ‘The Refuge’.

Things immediately feel off after a visit to a local cafe where she’s told there’s a possibility the hotel may be haunted; although uneasy, she goes undeterred to surprise her husband Paul (Jason Denyer) at ‘The Refuge’.

Upon arrival, Clare is greeted by Emma (Catherine Allison), the hotel manager, who instantly tenses up that Paul’s wife has unexpectedly shown up and not warned him. It’s then quite clear that perhaps the sinister activities in the hotel are coming from those alive not dead.

One thing that can be noted here is that the theatre space does really help to add to the show content, the rundown and disused hotel feel made more evident from the underground theatre environment.

The show itself has strengths in the right places, with thoughtful acting and commitment to storytelling. However, it sometimes falls short in terms of its dramatic effect and believability.

The relationship between Paul and Clare, supposedly husband and wife, lacks chemistry even despite their marital issues. It’s more evident with Paul and Emma’s affair, their lust for one another is rarely shown and any attempt to hide the affair when Claire’s around at times becomes all too obvious to the audience.

The dramatic effect is another element holding down the show; maybe it’s the way the writer intended, but it appears every time a revelation or the climax occurs, instantly the lights go down into a scene change, making the shocking moments quite anti-climactic. This does not take anything away from the actors: both Clare and Emma are excellent at portraying their own internal conflicts and are the highlights of the show.

An impressive directorial display from Gigi Roberts complete with cast and crew lead by Mark Cheng, who’ve done well telling a story with plot lines that are at times unfulfilled.

All in all, despite a few issues, it’s a very charming and enjoyable evening. The kind of storyline you’d love if you’re a midsummer murders fan, but nonetheless a lovely, well-produced show from all involved.