Be More Chill - Review - The Other Palace

I don’t want to be special, I just want to survive 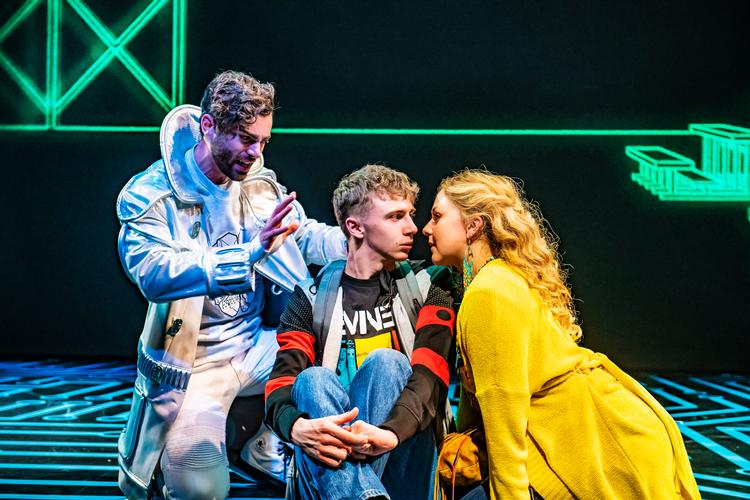 “I don’t want to be special, I just want to survive.” So says Jeremy Heere (Scott Folan), a geeky high school student in Be More Chill who, when he’s not busy masturbating, trying to persuade his depressed father (Christopher Fry) to put on some pants, or playing computer games with his best friend Michael (Blake Patrick Anderson), he’s pining for fellow classmate and theatrical nerd Christine (Miracle Chance). But when Christine catches the eye of popular jock Jake (Miles Paloma), Jeremy figures he needs to be popular to win her over. Thankfully he finds the solution in the form a SQUIP (a Super Quantum Unit Intel Processor), a small grey implant – from Japan – which when inserted into his brain will teach him how to be more chill. The trouble is, his SQUIP (Stewart Clarke), a Keanu Reeves lookalike, has bigger plans and Jeremy soon begins to regret his actions.

Based on a novel by Ned Vizzini, Be More Chill arrives at The Other Palace after a somewhat rollercoaster journey. The show, with a book by Joe Tracz and music and lyrics by Joe Iconis, premiered in New Jersey in 2015, closing one month later after somewhat mixed reviews. But thanks to the enthusiasm of the show’s fans, an Off-Broadway production followed in 2017 before it transferred to Broadway in 2018. While some of the ideas behind London’s latest musical aren’t necessarily original, particularly if you’re a fan of 90s movies, Be More Chill is a show perfect for the digital age and though it may be geared to a younger generation, it’s relatable for anyone who struggled through high school. The book, though odd in places and dark in others, is on the whole entertaining, with some important messages about friendship and staying true to yourself. Like Dear Evan Hansen the characters have their flaws, but the good thing about Be More Chill is that there are consequences for their actions. There are clichés and stereotypes, notably with school bully Rich (James Hameed) and the Mean Girls-esque gossip queens Chloe, Brooke and Jenna (Millie O’Connell, Eloise Davies and Renée Lamb); but their characters are still likeable. Director Stephen Brackett ensures that the musical flows well, though the second act feels sharper with the stronger songs, and the female characters having more of a part.

The varied soundtrack has something for everyone, with upbeat, catchy numbers like ‘A Guy That I’d Kinda Be Into’ and ‘The Smartphone Hour (Rich Set A Fire)’, that work their way into your brain and take over like a SQUIP; more humorous tunes like the aptly-named ‘Pants Song’; and the standout number, ‘Michael In The Bathroom’. The songs are brought to life thanks to Musical Direction from Louisa Green, Chase Brock’s energetic and inventive choreography and, of course, fantastic performances from the cast. Scott Folan leads them well, perfectly embodying the character of an awkward teenager who moves from geek to the popular guy, and copes admirably with some tricky songs. Blake Patrick Anderson threatens to steal the show with his rendition of ‘Michael In The Bathroom’ and endearing portrayal of Jeremy’s best friend, who’s cast aside as the SQUIP moves in. Stewart Clarke commands the stage as the SQUIP, almost like a superhero with his cool demeanour and wisdom. Wearing a coat that wouldn’t look out of place in the Matrix, his character becomes more over the top and intimidating as the show progresses, and is enjoyable to watch. Christopher Fry is heartening as Jeremy’s dad, who’s a reminder that it’s not just the teenagers who are struggling.

The female characters provide a lot of the humour in the show, with Miracle Chance a delight as the overly dramatic quirky Christine, one of the only people within the show comfortable in her own skin. Former Six cast members Renée Lamb and Millie O’Connell particularly stand out, with Lamb’s voice out of this world, and O’Connell’s boundless energy ensuring she’s one to watch; while Eloise Davies also impresses.

Beowulf Boritt’s set, Tyler Micoleau’s lighting and Bobby Frederick Tilley II’s costumes all combine to deliver a visual treat. The set, though relatively simple, is a throw-back to old school computer games, with a large screen at the back featuring graphics to represent school corridors, classmates homes and the nearby mall, and Jeremy’s brain as it becomes more frazzled. A particular highlight is the costumes, bold, colourful and original, a real feast for the eyes.

What’s so appealing about the show is that it doesn’t take itself too seriously. Be More Chill is fresh and fun, but with a lot of heart. With an infectious soundtrack, bags of energy and a brilliant cast, this is a unique and entertaining production deserved of its revival. It’s easy to see why Be More Chill is a fan favourite, and long may it last.

It runs until 3 May. Book your tickets here