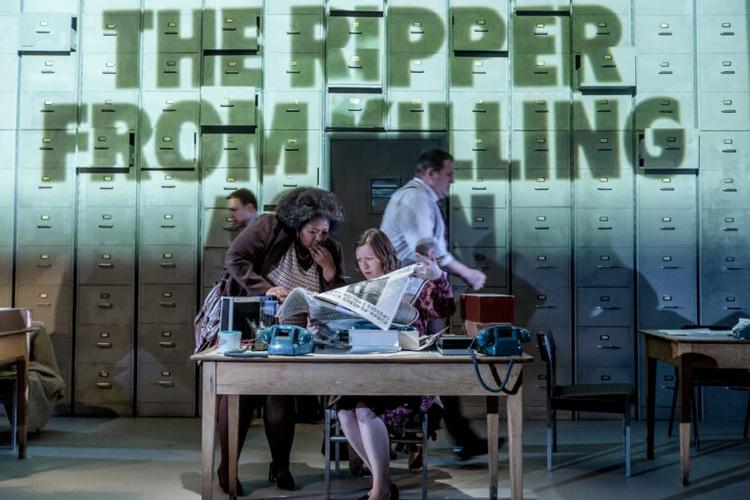 This is a captivating and compelling performance by a first-class line-up depicting the true story of the small police team hunting down the man dubbed as the Yorkshire Ripper.

It’s 1975 and the hunt is on – but with no real leads we follow this team’s plight as they try to turn every stone they can to catch the serial killer.

Megan Winterburn (Charlotte Melia) is running the incident room at Millgarth Police Station in Leeds with her team Dick Holland (Ben Eagle), Jim Hobson (Peter Clements), Sylvia Swanson (Katy Brittain), and Andrew Laptew.  And the man who is overseeing them is George Oldfield (Colin R Campbell). And then there’s Tish Morgan (Natasha Magigi) the obituary writer for the Yorkshire Post who is looking for her first big scoop.

With every murder, there’s hope and desire that the killer will be caught, but every tiny clue feels like no clue at all. It’s dead-ends after dead-ends. The story continues to develop and the hope fades to desperation. It’s like Tom and Jerry, the cat just can’t keep up with the mouse and he continues to kill and evade capture.

You know how the true story ends but this performance at the New Diorama Theatre near Regent’s Park, is still gripping throughout because you’re always hoping that things could have been different and that innocent lives could have been saved.

So much so, that there’s an even a scene in the play where the team puts the pieces of the puzzle together and works out that the killer is Peter William Sutcliffe. But then we’re brought back to reality with a thud, because back then an officer’s hunch that it was Sutcliffe was rejected by one of his superiors. That file on him was placed in one of a huge number of cabinets on stage and the only time it’s pulled back out is when he’s confessed to the killings after being picked up randomly by police for being in a car with a prostitute.

There were some very poignant moments in this performance which really shows the true scale of the impact that this mass murderer had on society over five years.

Some real footage of news broadcasts at the time of the killings were beamed onto the wall which will give you goose bumps.

The reality of the police failings to catch the killer also really hit home – when in later scenes more and more women were murdered after Andrew Laptew’s hunch was ignored. It’s like you can feel the guilt as the minutes tick away on the stage.

The scripting of this fantastic show by Olivia Hirst and David Byrne, brought home the unfortunate failings of the police but also highlighted their plight and as the show goes on you’ll be left feeling like you’re living the nightmare they’re going through second by second.

And even in the midst of all the murder and the mayhem there was some light relief with some funny moments that make you realise that life still goes on. And the humour was not tasteless, not at all. Again it was scripted beautifully and performed brilliantly.

It is no wonder this show had a sell-out run at the Edinburgh Fringe Festival last year because it’s absolutely fantastic.

The Incident Room is on until 14 March.