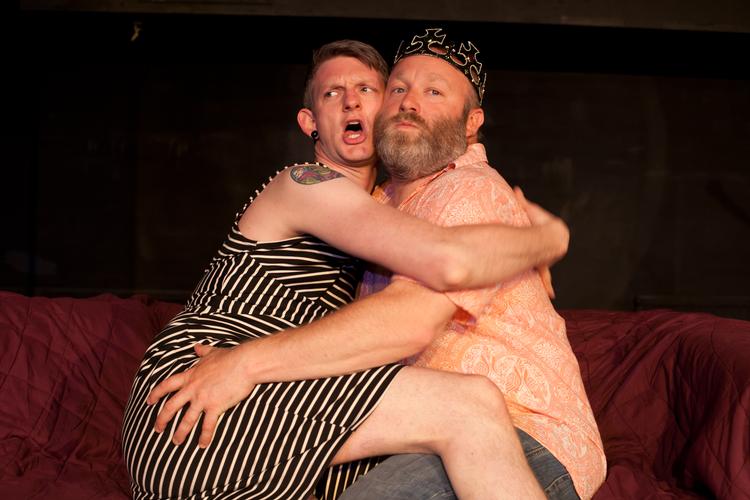 We all know how the story goes for the six wives of Henry VIII. But have you ever thought about learning the story through embroidery, barbie dolls, and silly songs? Well, Howard Coggins and Stu Mcloughlin - who make the duo Living Spit - have got you covered. Their production of the Six Wives of Henry VIII comes to London for the first time following sell-out runs at Bristol Old Vic, a UK tour and the Edinburgh Fringe Festival.

The show is hysterically hilarious from beginning to end. Fast-paced banter will make you almost roll on the floor laughing. Howard and Stu are talented, naturally funny, clever and outrageous in their jokes; with a twisted taste for stripping (just a bit). They alternate historical poorly-researched lessons, German psychedelic music routines, and ill-fitted frocks. Not a dull moment.

It all starts because of the resemblance of Howard with the infamous king. After their previous self-funded two-man historical drama is savaged in the press, Howard and Stu are at their wits’ end. Then they hit upon an idea for a show that could change everything. As you would imagine, Stu doesn't quite look like the ideal wife, but he'll surely try everything he can, including silly props and the best possible British accents.

nd you will not only get a glimpse into the (somehow imaginary) life of King Henry VIII, but also into the very humane dynamics of two artists working as a duo; will they also end up losing their heads? Whatever the end, they surely manage to deliver a brilliant, successful show that will ensure you have one of the funniest evenings of the beginning of this decade.

It runs until 7 March.