Billie's back and up to her Trix! 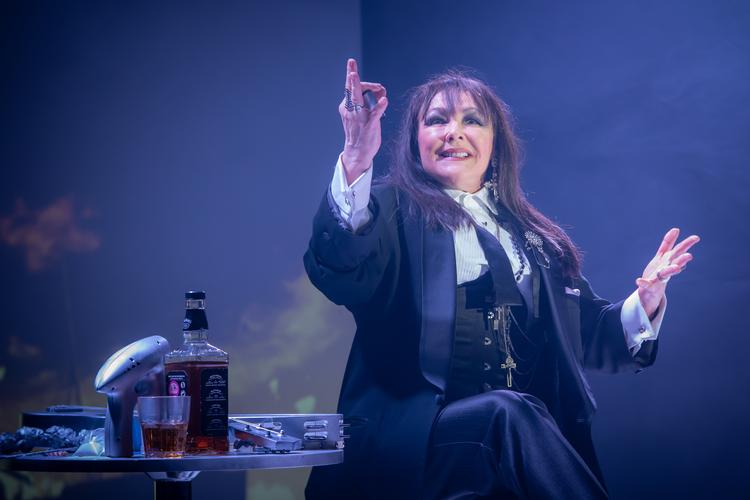 Musik is the spin-off from the original 2001 'Closer to Heaven' musical collaboration from Jonathon Harvey and the Pet Shop Boys, bringing the former fictional euro diva character, Billie Trix,  back in a cabaret-style show to tell her personal  Zeligesque life story in biographical vignettes.

The script is witty, acerbic and a cacophony of shockingly blunt one-liners delivered with ease by Frances Barber. It's rude, it's loud and chaotic and absolutely hilarious throughout.

Billie Trix name drops her way through her outrageous roller coaster ride of a life story, starting in her home country of Berlin, and is so brilliantly absurd you are willing it to be true. It's definitely not for the faint-hearted or easily offended.

She opens the show singing the lyrics 'Times were tough, but I was tougher, I learnt that lesson well' and claiming that Madonna continually stalks her and totally stole her eye patch look. This sets the premise of her almost tragic exaggerated sense of achievement she believes she has but that has never quite materialised in reality.

There are lots of celebrity cultural references throughout, Andy Warhol ( who she is convinced she inspired to paint soup cans), Shania Twain, Mick Jagger, Frank Zappa, and even Donald Trump (she could have been the First Lady don't you know), and not forgetting her liaison with a certain red-headed Prince.

Frances Barber is simply outstanding in this comedic role and appears completely comfortable as the apparently tough, drug snorting, bourbon drinking, straight-talking Billie Trix and yet is still able to subtly portray the 'what could have been' sadness that inevitably comes with her character. Trix is that person at a party who commands the attention of the room and entertains guests with her wild inflated stories and is convinced they are all laughing with her and not at her.

There are four brand new Pet Shop Boys songs in this production ranging in styles from folk to disco. However, you do not need to be a true Pet Shop Boys fan to enjoy this show. The music is secondary to Billie's character, and Barber's portrayal of her, and only comes alive because she has the ability to make it so. After all, she believes she IS music and therefore brings to life 'Ich Bin Musik' as a disco anthem perfect for the show and had the audience not only clapping along but almost out of their seats.

This is a must-see show if you are a Frances Barber fan. It's a fast-paced and very entertaining one hour show that will have you enthralled from the moment the formidable and unforgettable Billie Trix walks on stage.

It runs until 1 March