First staged in 1962, the show comes back to London 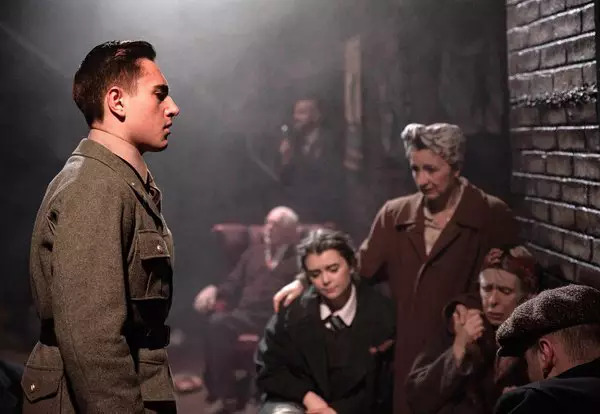 Blitz is just one of the shows that are part of the Phil Willmott Company’s Essential Classics season 2020: V.E DAY - 75 YEARS ON.

It is based during WWII in London where both the Jewish Blitztein family & the cockney Locke family live. When the children from these opposite families fall in love a wonderfully poignant wartime romance starts to unfold.

This classic style musical from Lionel Bart has an instant feel of being a much bigger show. The songs tell the story and the dance routines portray that old fashioned  'good old knees up' atmosphere that gives a sense of inclusiveness with the audience being so close. The set is bustling and busy with lots of individual connections between the characters going on, whilst the main premise of the story starts to develop. The space is cleverly utilised not only to create the claustrophobic feel of being stuck on an underground tube platform but also the winding feel of the  narrow lane aspect of the area at that time.

Mrs Blitztein ( Jessica Martin) instantly presents as the strong matriarch of the Blitztein  family as well as the natural leader of the group. She has inevitably earned the reputation of 'Queen of Petticoat Lane' with her being both loved and feared by her neighbours and friends. Her rivalry with the outspoken Mr Locke (Michael Martin) is blatantly apparent from the outset, it generates the witty undercurrent of disdain between the two characters, focusing on the differences in their families throughout the performance.

Blitz is essentially a celebration of the working class spirit during a time when unspeakable horrors occurred, night after night, as bombs were dropped relentlessly on London and other British cities throughout the war. It captures the unquestioned camaraderie of the time in London's East End, the pulling together as one against the Nazis as a whole, and the simple fact that life still goes on regardless. Yes, there was raw, heartbreaking suffering and terrible loss and complete terror, but it was faced with that  'stiff upper lip' high spirits and the typical unwavering humour making the most of a bad lot.

This musical encapsulates all the emotions across the board. Enthusiasm exudes from all the cast keen to make you connect with all their individual stories. The highs and lows of life during the war and what people had to do to survive. Jessica Martin's portrayal of the formidable Mrs Blitztein reels you in helplessly from the very start. We are left knowing that in spite of everything we do need those natural leaders, those strong family characters that hold everyone together in difficult or uneasy times. Which is even more prevalent now in 2020 with all its impending uncertainty.