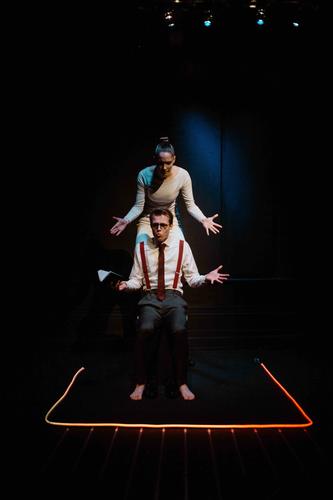 In the fast-moving world of AI, everything is replaceable – even Bertie. Created to serve the needs of his human owners, Bertie is the go-to personal assistant and fount of all knowledge for which no question is beyond answering.

Always available, ever engaging and invariably correct, Bertie remains supreme in his field, until a new and smarter application in the form of Vita is introduced that threatens to usurp him.

A play with many parallels in today's world, ‘I woke up feeling electric’, examines the effects of progress, questioning whether or not it can/should be controlled.

In a world of limitless possibilities, Bertie battles with an interloper whose presence threatens his very existence to what appears to be an ideal life. He is his own boss - albeit available on call 24/7 to his human owner (in this pared down production a disembodied human voice).

A very human dilemma involving electronic minds, Jack Robson’s play is unsettling in a premise which will affect us all, managing to present serious issues in a light-hearted manner by bringing its two inanimate protagonists to life in a Tron-like setting.

Just how long before unfettered AI assistants begin to run our lives with greater and greater autonomy is a primary cause of friction between Bertie and the updated version of his app?

Once undisputed king of the AI castle, Bertie's supremacy is threatened with the arrival of Vita - a new iteration of an independent-minded app with a mind of her own which offers considerably more choices with each update; some work as intended, others are more problematical although Robson's somewhat flimsy script seldom explores the opportunities in the dramatic meat as fully as they might.

As Robson’s beleaguered Bertie battles for supremacy with Christina Prouty’s vibrant Vita, we are presented with the situation from both points of view as Bertie fights to protect the status quo against Vita's nascent powers as she begins to test out ‘her’ territory.

Neither is a clear winner as their owner pits each against the other in a play which examines the future of life in a world where AI dominance will surely embrace us all sooner than we can imagine.

‘Feeling Electric’ is presented by a newly-founded, London-based, company of multinational theatre-makers whose aim is to create visually intriguing and entertaining theatre that is both intelligent and instinctive: on this showing, it must be counted a qualified success.

It runs until the 22 February