The blurring lines between fantasy and reality 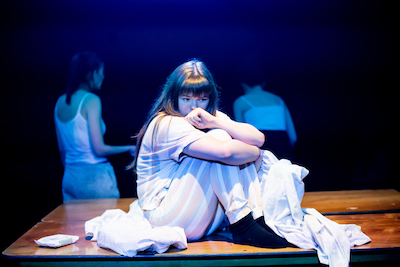 Directed by Lucy Jane Atkinson, with the audience on three sides, Flux Theatre presents a dark, chilling tale inspired by the true story of two schoolgirls obsessed with an online horror meme.

The Vaults Cavern is a terrifically creepy venue but felt too powerful for this intimate script. Scenes set in either classrooms or bedrooms did not lend themselves to the grandiose space; the brilliantly written dialogues (Tatty Hennessy) create the fun and the tumultuous relationships between the girls, but we remain distant spectators.

Holly Ellis' lighting design coupled with Sam Glossop's sound uses voice-over and an eery spotlight to maintain the atmosphere during scene changes with all of the actors on stage arranging the minimalist set. Although a chill was sent down the spine on many occasions, it felt difficult to care about the events.

This spooky three-hander showcased Melissa Parker as Ellie the outspoken and most-animated to suit the overlarge space. Despite the repetitive vocal quality during the many monologues, Monica Anne as Jel delivered some fantastic understated comedy with great timing and style, each quip landing effectively with the audience.

Even though the dialogue had moments of excellence, the structure felt unfinished, as though the message or aim of what Hennessy wanted to work towards was clouded. Hence the climax seemed to come out of nowhere and left the audience feeling unsatisfied and confused.