Bob and Bernard are both dying, and they’re not going down without a fight 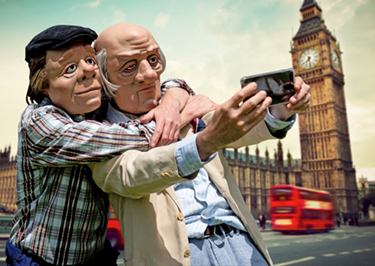 Death can be a funny thing if you can find the humour in such a devastating event - at least that’s what Bob and Bernard come to believe.

Fortified by a bottle of Bollinger and cossetted in the comfort of Bernard’s Bentley, these terminally ill men may have little in common as they face their journey into the great unknown together.

Under such circumstances even the latter stages of life can appear ‘Dead Good’ as the two old codgers set out to make the most of their shared time together in this short mime piece.

Part of the London International Mime Festival, and created by Vamos Theatre in collaboration with palliative care patients and specialists, this wordless show examines life from the perspective of two men sharing their last days together, cherishing their memories while life continues all around them as they stumble ever closer to the inevitability of death in a hospice where its sting is lessened by regular access to a drinks trolley concealed in a mobile bedside cabinet.

‘Dead Good’ explores the care process in a script by writer/director Rachael Savage to a jaunty soundtrack by composer Janie Armour, with additional writing by James Greaves and Alan Riley which explores the diversity of issues and opportunities facing this doughty pair who refuse to let their terminal status interfere with their enjoyment of life as they take to the open road.

A visit to the seaside stresses their growing interdependence, although their factual adventures can sometimes veer into fantasies like taking tea at The Ritz, where the strict dress code is shamelessly flaunted, much to the delight of the audience.

Despite the controversial nature of the subject matter, the piece can prove curiously uplifting – due in no small measure to the originality of the script and the characters themselves, played by Aron de Casmaker (Bob) and James Greaves (Bernard). When their fixed – and glumly characterful – masks are removed at curtain call, it is heartening to see how life-affirming the actors beneath are revealed: the plethora of other parts are undertaken by Angela Laverick and Joshua Patel.

Growing closer with every shared step towards the inevitable, the men finally part after an extended farewell that brings this touching show to a challenging close at Jackson’s Lane Community Centre where it runs until February 2.