The opening production of the new Riverside Studios 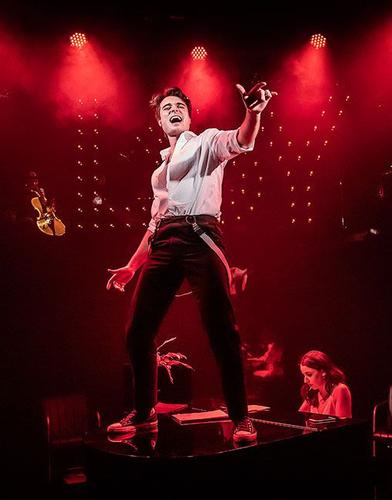 This ambitious stage recreation of Ingmar Bergman's 'Persona' is a fantastic example of a transition from screen to theatre done right. It follows the renowned stage actress Elizabet (Nobuhle Mngcwengi) being treated for a mystery muteness by Sister Alma (Alice Kirge), narrated smoothly by Paul Schoolman, and has the haunting melody of the Earth Harp played skilfully by William Close.

The heavy psychological elements are compounded by the poignant and evocative music that is played live during the performance. It synergises well with the poetic narration and adds emphasis to important plot points, while also giving a sense of pressure and entrapment. The construction of the enormous Earth Harp over the audience adds to this; one feels held by the music underneath the long strings suspended above. It is nothing short of entrancing.

The acting cannot be understated. Alice Kirge's ability to paint images in the mind of the audience is exceptional. Her skill in telling a story captures the mind deftly and masterfully takes any viewer out of the theatre and into her tale. The partnership with a more reserved character in Mngcwengi's Elizabet builds well, and the mute actress's internal conflict takes the spotlight on many occasions.

While at times the writing may feel jarring, it's important to note that every word of the play is taken from the original screenplay (apart from one brief introduction by Schoolman). It could be argued that the play could do with more cohesiveness, but the non-realistic style lends itself to this adaptation well.

PERSONA is marked with symbolism in a way that the audience is invited to confront many psychological issues, and Schoolman's direction doesn't shy away from this. Ideas of the truth, of lies, of identity, and even reality are explored; no easy task to present in only 90 minutes.

This is a piece that deserves to be seen and runs until 23 February.