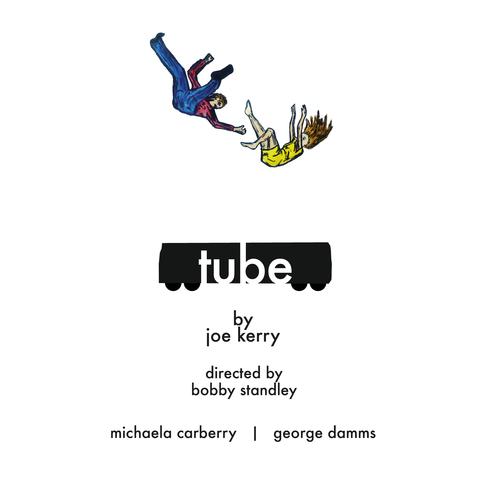 The London Underground is both a blessing and a curse for all Londoners. It is hot, it is crowded (and let’s be honest, you can find some weird people too), there are thousands of mice in its tunnels (and possibly some ghosts), but every day, two million people take it to go somewhere. And they rigorously avoid eye-contact, body-contact, or any other action that might signal knowledge of the existence of other passengers.

Not in this case. Tube follows two strangers who sit next to each other in an empty carriage when their train stops in a tunnel and doesn’t move again.

I said play, but actually, there are a few songs in it, performed by “The Man” (George Damms). Beautiful folk songs, perfect to break up the tension of the two strangers trapped in this uncomfortable situation.

Directed by Booby Standley, tube is a play about relationships and life, and it is mostly based on its dialogues: fresh, clever, and emotional dialogues but at times they feel disjointed.

The pace of the play slows down in some parts, especially with the monologues – when the actors talk to the audience, and it is not easy to understand what message the author is trying to convey. It’s like if, between an outburst and a faint, we don’t get to know the couple, and, in fact, the end feels unexpectedly forced.

It will be interesting to see what’s next for Joe Kerry. For the moment, from now on, I will probably look to the person next to me on the train with different eyes.

It runs until 2 February.