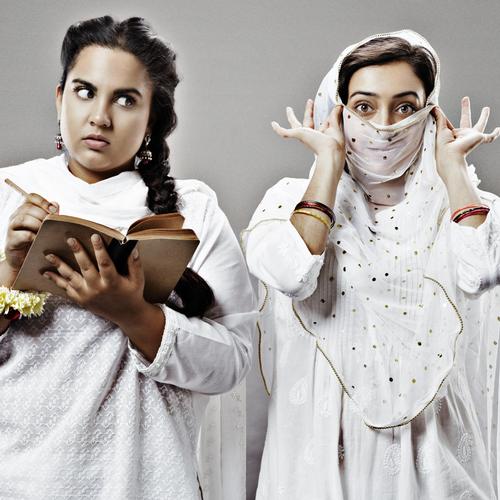 One of the shows kick-starting this year’s festival of new writers and performers at The Vaults was clearly a popular choice with not an empty seat in sight.

‘Santi and Naz’ is the tale of two ‘bestest best friends’ – the former a Sikh and the latter a Muslim – in the years before the 1947 partition drawn up by the British in India.

There was something beautiful about the way their friendship was depicted on stage. It was youthful, innocent, fun, funny, real and highlighted how kids were back then, relying on simplistic things like singing, dancing and daydreaming out loud to have fun without a care in the world.

But as the play goes on deeper themes are introduced – political unrest, religious divides, arranged marriage and sex.
Things are happening in their village but they don’t really understand the ramifications.

In between the uncertainty, there are more scenes showing the two girls – different in their personalities but the same in their innocence.
You have Santi (Rose-Marie Christian) who loves books, poetry, reading and writing and she wants Naz (Ashna Rabheru) to learn English. But Naz is like a free spirit, she doesn’t want to be pinned down to anything – until she’s promised to an older man with, what the girls describe, a beard like a slug, who must have bad breath that smells like keema and has yellow teeth.
While Santi swoons over a man called Rahul from a distance, it’s Naz who tries to encourage her to speak to him. And then there’s a kiss between the two girls while they’re role-playing – sparking uncertain feelings, which was a taboo back then.
Their use of the small stage in The Cage inside the Vaults complex in Waterloo is brilliant as they run around it using every inch of the space. The set was as simplistic as it can be but it worked because all your attention is on the girls for the duration of the show which was just over an hour.

Both actors are clearly Asian and from the UK and that’s not a problem, but when they’re trying to pronounce real Indian words it’s evident that they might not speak their corresponding languages, and it makes them sound like how a white person would say the same word which then makes it seem inauthentic, especially as the play is set in India.
There were also slight slip-ups with the beginning of some sentences because of a fumble over words here and there. It wasn’t a huge thing, but it was noticeable. And I suppose it was also a preview show which does allow for teething problems which can be ironed out for later performances.

It’s not commonplace to see such short plays about the partition and there was something  heart-warming about this play which centred on a time before the divide. It’s on until 2 February.