The Morning After - Review - Above The Stag 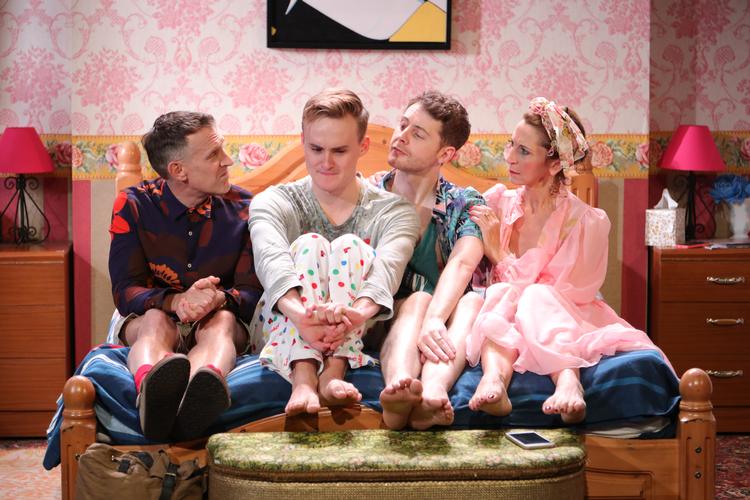 Thomas wakes up in Adam’s (Chris Cahill) bed. They hooked up the night before, drunk, and have spent the night together. But it is more than sex, and something starts to blossom between the two. But Adam has an eccentric family: his mother Barbara (Colleen Daley) and his uncle Martin (Matthew Lloyds Davies). There are no secrets between them, and everything is shared, without any filter.

Thomas soon finds himself caught up in the family’s dynamics. Will he stay or will he run away?

Written by Peter Quilter (his plays have been staged in more than 40 countries around the world and have been translated into 30 languages), The Morning After makes us uncomfortable viewers of an uncomfortable situation.

The show is a farce, and through a series of sketches, we become familiar with the characters, without being able to empathise with them, also because nothing about the story is plausible. There are some good laughs in the first few minutes, and it could not be otherwise: the situation of the two young guys who have to share all their intimacy with the mother of Adam is clearly weird; eventually, the plot keeps going in circles with the same jokes and dynamics and, especially in the second act, the story becomes repetitive and weak.

All the actors are good and with great timing, but they are one-dimensional: Adam, the naive and smiling one, Thomas an uncomfortable newcomer and Adam’s mother over the top. There is not much depth and that is another reason why we are left indifferent to what happens to them. Uncle Martin, who comes into the story at the end of the first act, doesn’t add much to the plot, except for more eccentricity.

The Morning after is a light-hearted comedy about love and disinhibited families, and it runs until 1 March.