Fourplay - Review - Above The Stag 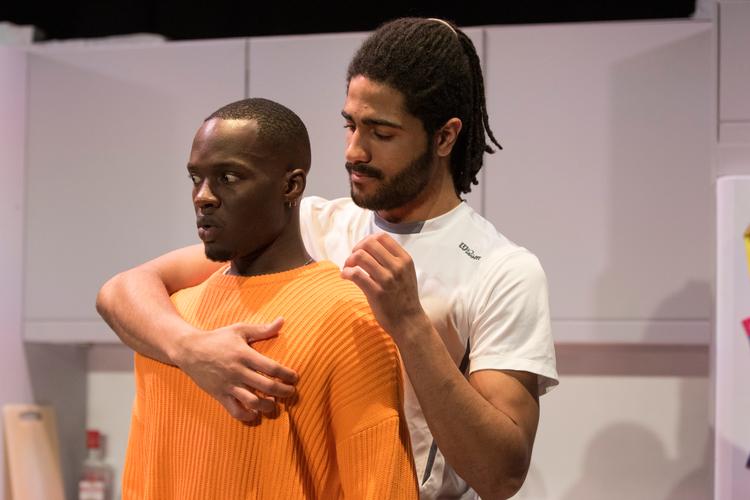 Rafe (Ashley Byam) and Pete (Keeran Blessie) have been together for more than seven years and the passion is fading away. So, they ask Michael (Declan Spaine) for a favour: to sleep with them. Things get complicated, when Andrew (Marc Mackinnon), Michael’s partner, finds out about the arrangement.

Fourplay, written by Jake Brunger and directed by Matthew Iliffe, is described as “darkly comic looks at sex and commitment in the 21st century”. Monogamy and infidelity are indeed a hot topic in theatre.

Lifelong monogamy is very much ingrained in Western culture and psychologists have always tried to answer the question if it is the key to happiness or if open couples are as happy as the “not open” ones.

The play doesn’t give answers, but moves with a fast pace and sensitivity into a territory that perhaps some audiences might find absurd, but it is the reality of many.

There are plenty of laughs, especially in the central hilarious scene of the dinner, and the comedic timing of the cast is excellent. Keeran Blessie’s Pete is quiet and controlled, but he is the most determined to follow his agenda, Ashley Byam’s Rafe is nervous and somehow naïve, while Marc Mackinnon is fantastic with his mood fluctuations, going from ironic, to sarcastic to angry, to extremely vulnerable.

As the show progresses, the story reveals its darkness and depth, and the sadness of the four guys torn apart by the monogamy/polygamy dichotomy.

Fourplay is a cleverly written, well-acted and directed, highly entertaining show that will make you laugh and think, and everything in between.

It runs until 22 February