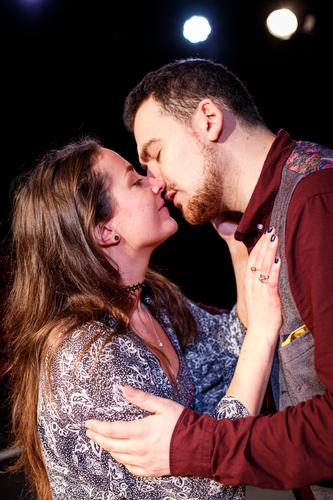 Billed as "the rom-com that absolutely no one asked for" Jew...ish is set through the forum of the couple in relationship counselling sessions with Lionel, whose presence takes the shape of both characters breaking the fourth wall and using the audience in the place of having a third character. A very clever device that has been timed perfectly.

The couple TJ (Edie Newman) and Max (Saul Boyer) are wrapped up a polyamorous relationship, agreeing at University that traditional relationship restraints were not how they wanted to live. However, as they mature and friends marry and settle down, their outlook begins to change. Passions run high as they attempt to move on with their lives in separate directions. Just how successful will they be?

I have to say my knowledge on Jewish traditions and beliefs is somewhat limited and I can only presume that what is depicted in this play is accurate, and seeing the calibre of actors and the production team I think it's safe to say that it is fairly correct and has been well researched.

For 75 minutes, both TJ and Max keep up the fast-moving momentum combining comedy, laughter with a tinge of sadness from the beginning right to the end. Nax opens the performance with a very upbeat interesting song highlighting how proud he is to be Jewish.

The highlight of the play takes place during a car journey to Max's Grandmother's funeral. Grabbing the remote control, TJ drives her little red mini at breakneck speed to get Nax there to say goodbye. The remote control car is all over the stage and where it ends up is anyone's guess.

Co-creators Poppy Damon and Saul Boyer have morphed old and new in Jew...ish by combining the traditional family Jewish values and a modern polyamorous relationship, although it doesn't sound like a match made in heaven the pair have created a play that has made it work.

Jew...ish's co-Directors Kennedy Bloomer and Toby Hampton certainly have bought the rom-com genre up to date with this hilarious play. It's definitely one of those plays I would happily watch again.

It runs until 19 January