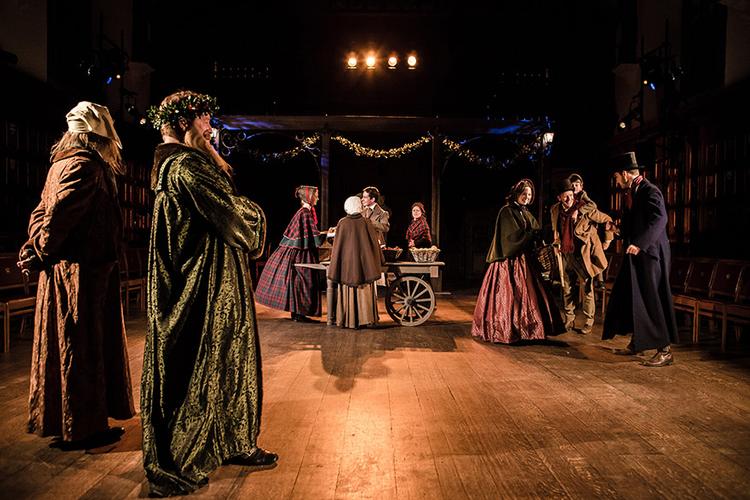 A Christmas Carol by Charles Dickens has become one of the most loved Christmas stories. The tale of Ebenezer Scrooge is an intimate performance in Middle Temple Hall, which is wall to wall of dark wood panelling and tall stain glass windows.

The set was simple in design with wooden beams forming three arches providing entrances for the cast, props were carried on and off with the cast. The costumes stayed true to the Victorian fashion and with a festive touch with women in tartan dresses and bonnets and gentlemen in top hats and tailcoats. As the performance was intimate there wasn't a need for microphones, the cast was clear and delivered the most wonderful harmonies to echo through the hall.

This musical adaption of A Christmas carol offered Christmas songs rewritten to fit the story of scrooge, we were treated with alternatives to Deck the Halls, Ding dong merrily on high and Hark the Herald sings. The musical numbers are inclusive of the entire cast and instrument performers, we do love a cast who can multitask!

David Burt poured power and hatred into his performance of the miserable man that is Scrooge, at times the audience around us complained they couldn't hear him over the music. The huskiness of his voice failed to project, but in the second act, this was overcome and we heard him clearly.

Antic Disposition's adaption of A Christmas Carol is joyous and a wonderful Christmas treat to get you in the festive spirit.

It runs until 30 December.