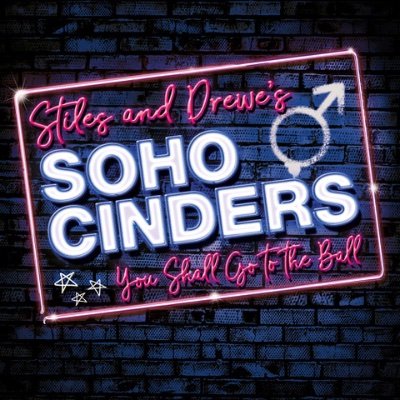 Taking a classic fairy tale and warping it into a modern flirtation of an average day-in-the-life of the residents of Central London, Soho Cinders brings us love, betrayal, sex and scandal.

With a refreshed casting, we follow Robbie (Michael Mather) our Cinderella protagonist as he sashays through the exciting and pivotal online dating culture of today. Juxtaposing his impoverished lifestyle: living above a launderette with his two ugly stepsisters (Michaela Stern and Hollie Taylor) and sidekick Velcro (Livvy Evans) who know exactly how to push his buttons, we fall for the charms of the wealthy political candidate, James Prince (Lewis Asquith). It's not the classic meet-cute that we all know and love, in fact it gets quite grimm, but it is romantic, colourful and full of vim, with a musical score that Disney might even envy.

Most numbers stand alone as spectacles without particularly developing character or storyline, subsequently the whole show just feels like one big party. Directed by Will Keith and Choreographed by Adam Haigh, the talented ensemble and their exhausting energy compliment the main cast gloriously, perhaps showing them up in part. Several scenes reveal clunky direction as cast members look uncomfortable on the stage and seem to have no clear objective. Hopefully this is just a reflection of the new recruits finding their feet and not just aimlessness encouraged by a shallow script.

Music (George Stiles) and Lyrics (Anthony Drewe) are fun and full of brilliant vocal moments and silly, sexy one-liners, nevertheless, there are an uncomfortable amount of pop culture similes or metaphors and an abundance of on-the-nose description and exposition. Though there was very warm and familiar sentiment in some numbers, it was let down by the underdeveloped character exploration and did not strike many emotional chords.

The character line-up is composed of different pairings, all with unique and contrasting relationships, yet the audience never gets to experience those with many missed opportunities of nuance. Stern and Taylor have the most on-stage chemistry as the stepsisters, beautifully bellowing their outrageously raunchy performances and serving both ends of the difficult staging.

Soho Cinders are by no means a work of genius, but it does serve its purpose effortlessly. Pure entertainment with a soundtrack worth replaying. Despite glimpsing into the shabby chic areas of London's labyrinth it is always a breath of clean air to see a representation of sexuality and equality presented onstage satirically and unashamedly.

It runs until 11 January