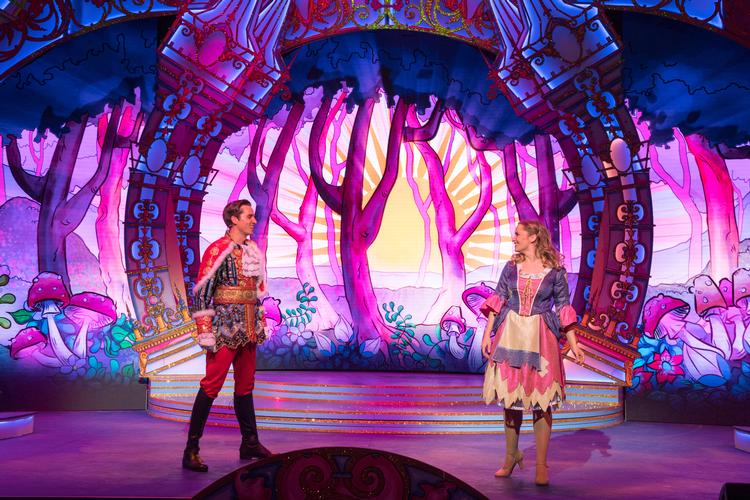 What is Christmas without a good old classic pantomime?

As times are changing sometimes the old "it's behind you" just doesn't cut it any more, audiences are expecting bigger and better and the cast and crew of Cinderella delivered a razzle-dazzle show.

The stage design, by Mark Walters, was outstanding, with CGI backdrops and flower vine surrounds but stayed true to a classic multilayer panto design. We were treated to special effects, rotating stages and beautiful stage lighting where the set lit up within as well as with an array of colourful stage lights from above.

From renditions of current hits such as Lizzo's "Good as Hell", Lewis Capaldi's "Someone you loved" to classics such as Leona Lewis's "A moment like this" the audience was either bopping in their seats or howling with laughter, both children and adults. Tim Vine excelled in his role of Buttons, flawlessly delivering his trademark punny, one-liners. There was an entire scene with Buttons and the ugly sisters where they used continuous chocolate bar puns such as "don't get your snickers in a twist" it honestly had the hall giggling away, such a mild form of comedy but so so effective. Grace Chapman and James Bisp were a wonderful Cinderella and Prince Charming.

Whilst the pantomime was next level in regards to stage effects, it kept to its classic roots with audience engagement, with one scene, again with Tim Vine and the ugly sisters singing ghostbusters whilst sat on a bench in a forest, asking what's lurking around and where. The kids all sung along and bellowing at the top of their lungs. Honestly, it filled our hearts to see kids screaming away in entertainment.

Filling the boots of Dandini, Prince Charming's footman, was 2016 Strictly come dancing winner and TV star, Ore Oduba. Of course, they implemented references to strictly with the music and dance numbers, the dance crew consisted of both young adults and children.

Our guests, 9-year-old Tylah and 4-year-old Harper, experienced every emotion throughout the panto, we had tears, we had fear, we had dancing and most importantly they laughed and heckled. If we didn't have all of this then the show wouldn't have done its job.

Cinderella at Fairfield Halls is a wild and hilarious evening full of song, dance, slapstick wit and an immense level of glitter suitable for men and women, boys and girls of all ages. Tickets start from £15.00 but to see a hall full of children (and adults!) on their feet howling with laughter, participating in songs and heckling the bad characters is priceless.

qAmPokQgru
OUAzwZmfpka24-Dec-2020 : 07:12:49
We chose the Fairfield Hall pantomime because I had seen Tim Vine in Panto at Wimbledon before. I knew he would be superb but I was delighted that the rest of the Cinderella cast were fantastic too. The costumes and special effects were spectacular. There were no smutty jokes . It was just good clean fun from start to finish. I was with a group of 18 adults and we just loved it. We came away with that feel good factor. We can’t thank you enough for an afternoon of sheer enjoyment .
Anne Pardon11-Jan-2020 : 10:22:48
Glad you all enjoyed it. Let’s hope there are less mistakes in the panto than this review: Inconsistent punctuation & uppercase usage in song titles and Strictly/strictly etc and too much ‘with’. Sorry to be ‘Ba, humbug’ etc especially at Christmas, but good journalism is worth fighting for.
Frankie19-Dec-2019 : 03:48:02
It was indeed the traditional Panto meets Disney, a magical professional spectical with laughs, superb song choses, choreography. The cast grabbed us from the moment this show opened until the end. Audiences in Croyden need to see this Panto it does stay true to it's classical roots and thoroughly entertaining for children young and older amongst us!! ?????? You think you know Cinderella Panto! NOT LIKE this show superb show, this is the next level of Pantomime. You won't be disappointed.
Terry Bright 14-Dec-2019 : 02:02:38
Amazing pantomime , felt like we was in the west end , heart warming and hilarious, defo a must watch.
Jackie Glading 13-Dec-2019 : 06:52:35