A rugby ball’s soft, a hockey stick’s hard, what does that make me? 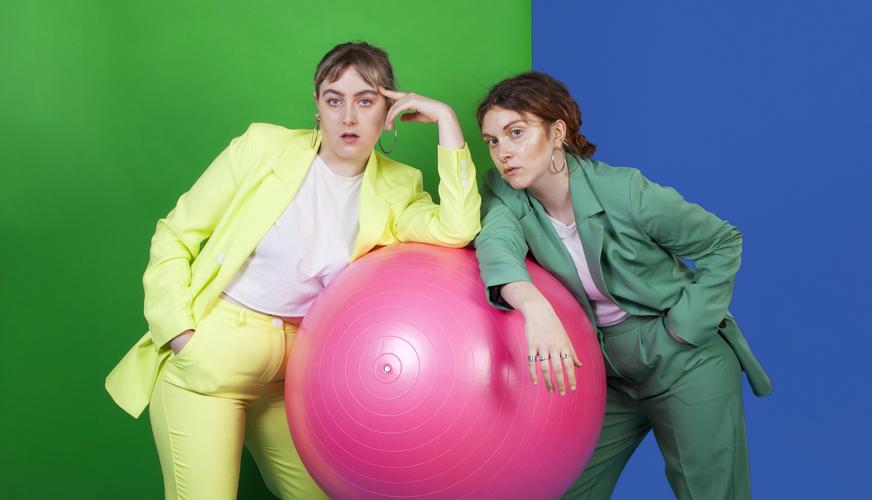 Two performers ask questions to forty-three different male humans to help us all understand what it means to be a man, if anything. In a nutshell, FITTER is the epitome of this decade's theatrical trope; Young theatre creatives concocting a piece that makes a comment on society without ever intending to make a comment on society: presenting fact and opinion harmoniously to ask questions to both creator and spectator.

As directors and performers, Mary Higgins and Ell Potter (playing themselves with direction from Jessica Edwards) are fearless, insightful and generous actors. What a brilliant dynamic duo.
The only minor gripe imaginable (and it is very minor) is that the choreography had so much impact, hitting all kinds of funny bones that the audience craved constant, tight synchronicity that wasn't always achieved. Their companionship and complicity is emboldened by their brassy, dark and topical humour. They are all-singing, all-dancing and all-round impressive young creators. It is a real and humbling treat to watch two fierce friends present inquisitive, soulful work on stage.

As well as live absolute karaoke bangers throughout, the two women were comically dubbed with hilarious and heartfelt verbatim voiceovers, remixes and symbolic sound effects (Tom Foskett-Barnes). The voices are from masculine presenting people from all walks of life that the women had previously interviewed and were enlightening as such without any additional performance.

The episodic switchover between scenes, helped by discoteque lighting (Bethany Gupwell) kept the findings organised and fresh as the audience delved into the psyche of over forty people all at once.

Ruta Irbite's set design was simplistic: a green screen-like backdrop on thrust staging in an intimate black box theatre felt essential for the sensitive material that the creators had planned. Her costume was garish, eighties "crap drag" and marvellously symbolic of how any stereotypes we decide upon, no matter how unrealistic, can stick.

One of the most refreshing and important aspects of this piece is that it was built on reality, and within reality, there are horror stories. What you can achieve with theatre is the chance to step out of that reality: on several occasions, there is a sensitive material trigger warning and the audience are given a lengthy pause to step out if needed.

Hotter Project and EKP have presented Soho Theatre with an absolute gem with FITTER. Asking what makes a man, who knew the answer would turn out to be equally harrowing, hilarious, heartfelt?