The premiere of Breach Theatre’s first ever Christmas show 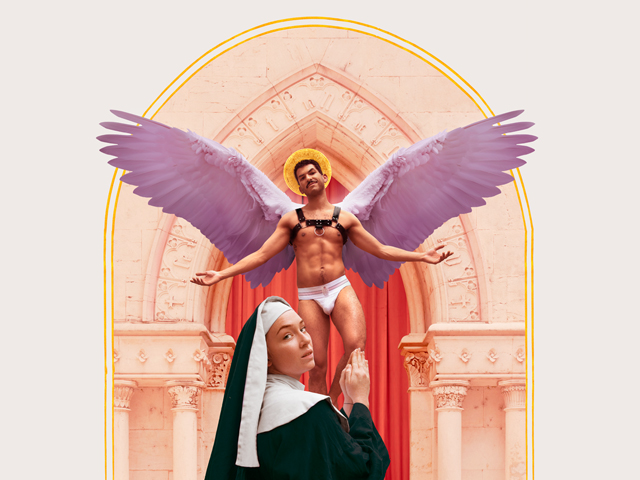 Joan of Leeds is a hilarious and unexpectedly relevant tale of Joan, a 14th Century Nun, who fakes her own death in order to escape her convent and break her vow of abstinence to start life anew. However outside the convent walls she struggles to cast aside the emotions she’s been feeling as she tries to understand her sexuality.

Based on a true story, the musical is performed by a cast of talented actor musicians who double up as multiple characters as well as the show’s band creating many comedic moments involving costume changes (or the lack of at times!). The songs are catchy, especially Alex Roberts’ song as the snake, and are stylistically very different with ballads, choral numbers and heavy metal to name a few.

Billy Barrett’s direction doesn’t pretend that the show is a huge budget production but instead lends itself to the small scale design by Lizzy Leech characterised by cardboard cut out clouds and heavy usage of a smoke machine. In the story, the “Yorkshire Medieval Players” are a travelling theatre group who have come to perform the life of Joan of Leeds. As a result the script, direction and also the stage design work hand in hand to create the vibe of an act seen at a travelling fair but with the budget of a primary school nativity play which makes for a thoroughly entertaining and hilarious show.

There’s is an important message about how you shouldn’t be afraid of who you are and ultimately the anguish caused by suppressing your emotions. This depiction of a true, historical, story has a clever way of making the modern audience understand towards the end of the show. The overall message of taking a stand for who you are and what you believe in is solidified in the final song and is a fantastic end to an evening.

Joan of Leeds runs at The New Diorama Theatre until Saturday 21st December.