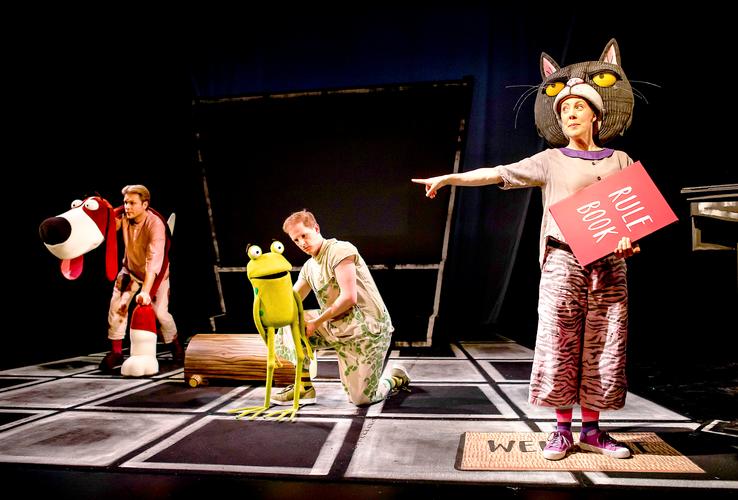 The characters of the popular Oi Frog series of books are brought to life on a West End stage...but catch this show if you can because it’s absolutely brilliant and only on for a limited time.

There’s something for everyone in this show – yes it’s primarily for kids so I took my little niece, but it’s akin to Pixar’s Toy Story in that there’s a lot of fun in there for the adults too.

It’s FROG’s (John Winchester) first day at The Sittingbottom School For Animals and he has nowhere to sit. Until CAT (Lucy Tuck) brings out the rule book to determine where that will be and so the rhyming bonanza begins.

Not content with that, cheeky FROG takes matters into his own hands to take control and change the rule book and poor DOG (Darren Seed) acts as the go-between, the one who tries to please everyone by telling them they are his best friend.

The show is based on books by Kes Gray and Jim Field and there are some very special additions to this performance in terms of characters and they are hilarious – two of them are played by Simon Yadoo who brings so much energy to the stage at the Lyric Theatre in Shaftesbury Avenue, that you just want to put his performance in a jar to take home to open when you need another laugh.

He gives you an amazing Mexican dance on stage, has a comedy sketch with a skunk that makes you laugh and say ‘ewwwwwwwwww’ out loud all at the same time and is the presenter of Meerkat TV, the news show that tells you everything you need to know about the goings-on at Sittingbottom School.

The puppets are brilliant and the costumes are fabulous. The set starts off as if there’s a digital blackboard on stage, but it then gets used for all sorts of things and it’s all done so well.

And no kids show would be complete without some audience interaction and some water being squirted into the rows to the screams of all the children who love it just as much as the adults.

I might have laughed out loud throughout this performance, but there’s only really one way to get a proper verdict. I asked my five-year-old niece Tara what she thought and these were her words...She said: “No, I didn’t like it (LONG PAUSE)...I loved it.”

We’ve seen a fair few shows together and this has by far been her favourite. She told me the best moments for her were Meerkat TV, the elephant and skunk scene and the moment DOG sat on FROG.

This action-packed play is full of rhyming fun and will have the kids entertained and you too.

It is only an hour long, but honestly you won’t want it to end.

It’s touring around the country and it’s on in London until 5th January. More information: here