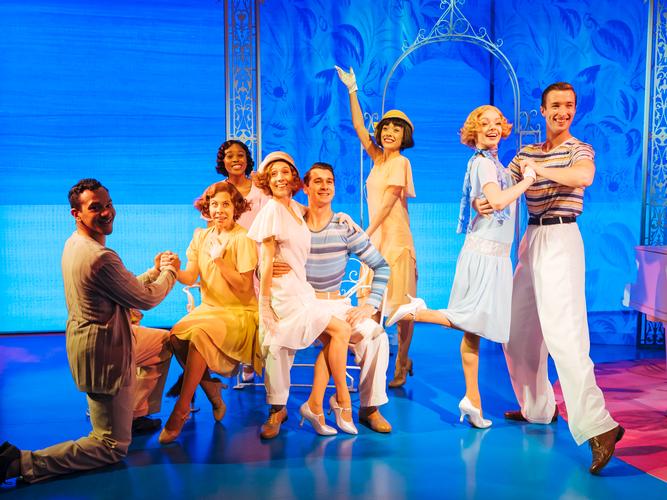 After its remarkably lengthy run during its original performance in 1954, and subsequent successes in its film and revivals, Sandy Wilson's critically acclaimed 'The Boy Friend' is back to brighten up your season. Showing at the Menier Chocolate Factory, the immersive space feels like an invitation to dance along with Matthew White's adaptation, being so close to the action that you may even come away speaking in Queen's English, if not French.

Opening with seamless sequences of kicks and flicks, the lighthearted tribute to the roaring Twenties maintains its crisp choreography, arranged by Bill Deamer, throughout. From tap, to tango, to two-step, with a touch of charleston too, there's no doubt that the routines aren't amazingly executed- a true feat to fit comfortably on the compact little stage. Paul Anderson's lighting design provides warm glows of summer ambience and when combined with the charming orchestral pieces that match the score, make the perfect fit for the joyful musical in which it accompanies.

The show follows Polly Browne, played beautifully by Amara Okereke, and her desperate search for a lover to take to the ball, while being taught at a finishing school on the French Riviera. Alongside the exuberant performances of the rest of her girl gang paired with their respective male counterparts, the brilliant cast capture the essence of the ease with regards to a world so vastly contrasted with the media-saturated society today. The lovestruck couples unite in a flamboyant range of costumes, designed by Paul Farnsworth, to close the proceedings.

Despite two intervals for set changes, the fluency of the piece remains intact, woven together by the fantastic soundtrack. Keeping it largely unembellished with the scenery, the simplicity truly reflects that of romance at the time, working really well with the placement of the audience in relation to the performance at this venue.

Though packed with moments that reflect the vast range of talent on stage, particularly show-stopping moments include Bobby and Maisie (Jack Butterworth and Gabrielle Lewis-Dodson) taking on 'Won't You Charleston With Me?' with utmost energy, and the gorgeous blend of vocals by Amara and Janie Dee (who portrays Madame Dubonnet) in 'Poor Little Pierrette'.
Dabbling in the realms of comedy, 'The Boy Friend' is difficult to assign a genre, encouraging a varied audience, with humour understood by all. However, there are often instances that draw away from this, appearing cheesy and a tad awkward, nevertheless not hugely spoiling the performance overall.

This is an ideal show to lighten these dark winter days, providing a healthy dose of escapism and pure joyousness for all.