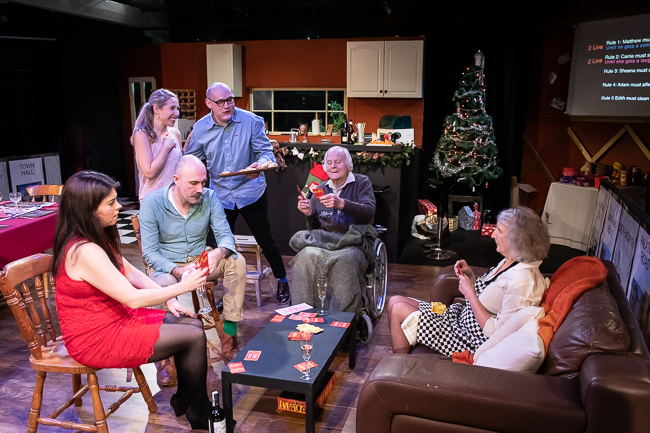 Christmas comes (slightly) early to the Tower Theatre in Stoke Newington with director John Chapman's production of Rules for Living. Playwright Sam Holcroft's seasonal self-help satire mercilessly lets rip at the English middle-classes' repressed, bitter pretensions of properness as one particularly dysfunctional family's strict set of – well – Rules for Living fall to pieces with stress over the course of a chaotic Christmas Day.

Perhaps one of the biggest highlights from the off is Set Designer Rob Hebblethwaite's spectacular work on the space. Together with what must have been a militarily organised platoon of get-in assistants,  he has crafted what is surely one of the most beautifully elaborate and alive sets you'll ever see in any London fringe production. Complete with all the proper household necessaries and neatly divided into fully-functional separate domestic areas, it's a picture-perfect recreation of a cosy, Christmassy, middle-class family home in London which is sure to immediately draw in a captivated audience and fill them with the spirit of the season. Also present is the crucial video screen display for the essential "Rules" each family member must abide by to function in the Christmas chaos; naturally, much dramatic irony ensues, making for some very amusing comedy. All in all, a marvellous technical accomplishment to be sure, although one that might have benefitted from slightly larger font size on the screen for the benefit of those audience members less able to read well from a distance.

Meanwhile, Chapman confidently directs a fast-paced, compelling work full of fine performances from a close-knit ensemble. Every recognisable strain of family get-together horror is present and accounted for, from lead Adam Hampton-Matthews' pitifully insecure, dorky loser Matthew, lying to himself and everyone around him in a horrid, nasally voice, to Rosanna Preston's expertly realised matriarch Edith, full of seething passive-aggression and resentment towards her family straining beneath her outward middle-class manners. Matthew has also brought along his new, failing actress girlfriend - Kasia Chodurek's Carrie – who provides more than one convenient distraction, whilst swiftly proving herself the sort that everyone is glad of at the family Christmas party; an insufferable bore, utterly convinced of her own delightful 'quirky randomness', but who is actually a thoroughly irritating, slightly scary weirdo sorely lacking in proper social sensibilities.

Meanwhile, Dickon Falmer's embittered, sneering Adam compellingly struggles to keep his thread-bare marriage from breaking, together with Hattie Hahn's put-upon Sheena endlessly trying to force things to work between them, and Helena Braithwaite proves herself a one-scene wonder as their daughter Emma. Amongst the best performances of the night is Tom Tillery's elderly invalid Francis, the far-fallen patriarch that still has yet to stoop to his truly repulsive lowest. His is a wonderfully skilful, almost wholly physical performance that relies on Tillery's veteran command of movement and body work, one so good, in fact, that should Tillery chose to bid goodbye to his time in the theatre after this, it would be a fine farewell indeed.

Amongst all these excellent performances, the ingredients are there for a time-bomb to trigger over turkey, and the audience is left only to wait. Fortunately or not, Chapman's direction moves things along at an extremely fast pace – perhaps too fast at times, as the cast don't seem to have a spare moment to slow down and to let their characters breath, or to play the subtleties of lesser moments, particularly early on; but it does happen to give the slower, quieter dramatic moments greater impact when the action slows down enough to accommodate them, and these are excellently realised. Also brilliantly executed are the many scenes of tense, shouty, slanging-match pandemonium, and when things do eventually, inevitably rise to a crescendo of terrifyingly violent domestic chaos, Fight Director Richard Kirby's work shines before the atmosphere finally cools off into a last, tense tableau of ruin.

Altogether, a brilliantly performed, darkly comic Christmas treat for theatregoers, sure to entertain.

It runs until 7 December