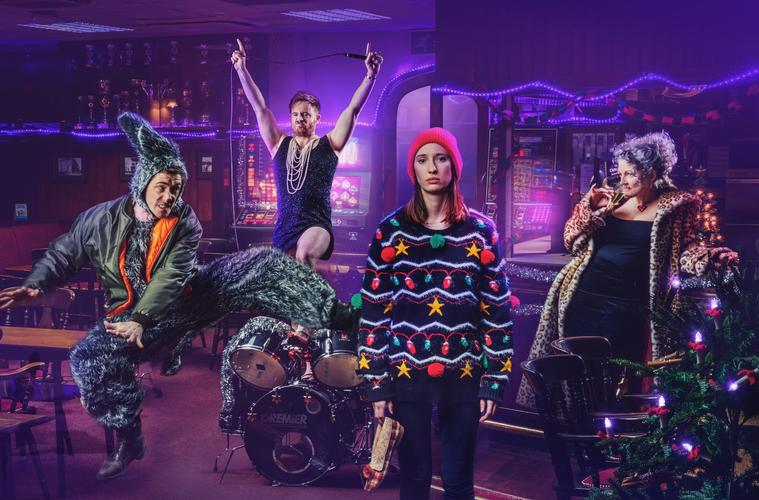 This timeless story has seen its fair share of interpretations over the years – but probably nothing quite like this swashbuckling version.

It has the bare bones of the tale and the rest is well and truly brought forward to 2019.

It’s set in a pub which was owned by Cinderella’s (Rosa Coduri) father, but he died. She’s left there with her stepmother Judy Garland (Lizzie Hopley) and her evil stepsisters Simone (Louise Haggerty) and Garfunkel (Megan Pemberton). Buttons (Patrick Knowles) in this play at The Vaults in Waterloo, is not a man. Oh no – in this play he’s a suicidal dog. And not just that, he spends the entire 90 minutes of the show carrying around a prosthetic leg and you never really know why…until the end.

Cinders’ fairy godmother is not the angelic figure you would envisage either. It’s crossing-dressing Mike (Jimmy Fairhurst) in this case, but boy does he have stage presence.

There’s no ball or gala in this play either, no, the big night is a karaoke event at the pub.

And there’s no glass slipper either – oh no there isn’t. It’s been replaced by an orthopaedic slipper, which was left to Cinderella by Prince Charming’s gran.

And where to start with Prince Charming (Jack Condon) – he was by far the funniest character out of the lot.

There’s nothing charming about him, he’s a player, he’s a cockney, he’s a bit simple, he does the best facial expressions and flounces around with a bum bag straight out of the 80s strapped diagonally around his chest but with some real purpose but without having a purpose and when you put all of those together the end result is just hilarious. He was hilarious.

Simone and Garfunkel also entertained the crowd with their funny sisterly banter, their not not-so-great singing and their twerk-tastic dance moves.

The show itself was kicked off with a karaoke rendition of Queen’s Bohemian Rhapsody – an unexpected but a very pleasant start and as the story starts to unfold so does more karaoke.

If you’re like me and only know all the words to songs by the Backstreet Boys and just the chorus words to every other song be it a hit or not, then have no fear, you can sing along as the words are projected on big screens.

You can also stay behind and do some karaoke of your own. I was tempted, but the Backstreet Boys were not on the catalogue so my participation, or lack of it, was in protest.

There were a lot of laughs throughout this show, some really loud ones. Yes, it’s taken the magic out of the traditional story but it’s also been injected with some priceless modern magic which made it a great night out.

'Cinderella' is on until 12th January so if you’re booked now for December with parties, parties and more parties, consider it for something to do in the new year to help with those post-Christmas blues.

It runs until 12 January