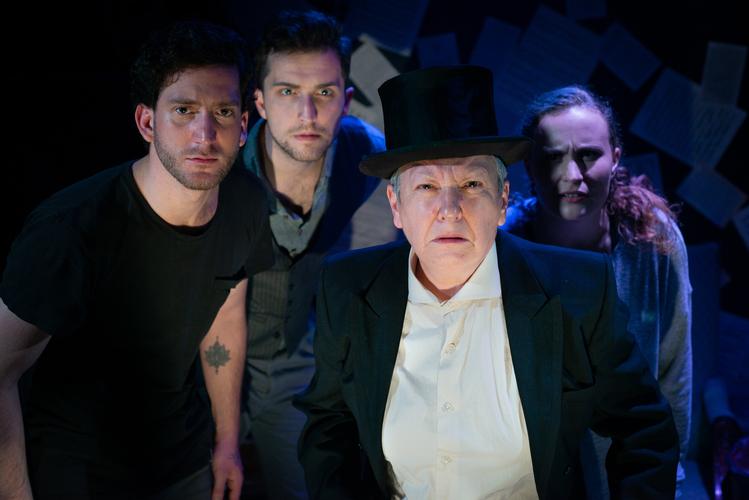 Dickens’ classic seasonal morality tale of the bitter miser Scrooge receiving a stern lesson in following Christ’s example all year ‘round comes to the Bridge House Theatre in this lively new stage production.

Theatregoers with a soft-spot for the characterful pub stage will find much to love here.

Things start strongly, displaying impressive production values, and making good use of the intimate space throughout the show, with a detailed set, evocative foley artistry, musical accompaniments, and simple special effects doing much to create a suitably festive atmosphere.

In a charming twist, the enthusiastic cast often literally regale the audience with telling the story as the action moves between scenes, which, together with a wonderfully energetic party scene – by far the highlight of the show, full of invigorating audience participation – gives everything a wonderfully communal, Christmassy, fireside feeling most apt for Dickens.

The cast share out the work’s many roles between the four of them, with some stand-out performances to be found. Jamie Ross' Ghost of Christmas Present, with his infectious joviality and distinctive Scottish brogue, is a memorable highlight. Much has also been made of Rachel Izen’s casting as the first female Scrooge.

It’s an admirably earnest turn in a work of uneven performances, let down by jarring inconsistency in how the younger Scrooge is cast as male regardless. It feels like a missed opportunity to bolster the female representation in a text nearly devoid of women’s presence originally, further implies that the idea of a woman central to the cast is abnormal as opposed to expected, and passively places Izen – thus isolated by the lack of a fellow female Scrooge The Younger – under unfairly harsh scrutiny for her performance, which seems to suffer for that anxiety.

Indeed, such casting could have lent the lost love between Scrooge and Belle a modern Sapphic overtone that may have provided an interesting, relevant spin on the insight into the cause of the elder Scrooge’s repressed Victorian misery. It is a shame that this was not so.
Granted, Saorla Wright fills a variety of small roles including Belle, but this hardly seems to be of the same consequence.
It all makes for an inconsistent, although heartfelt take on Dickens’ beloved classic.

Whilst it may not pass muster as high theatre, there are some genuinely wonderful moments to be found at its strongest points, and as a jovial, energetic pantomime spectacle, it's a triumph.

It runs until 22 December.