The all singing, all drinking alternative Christmas knees-up 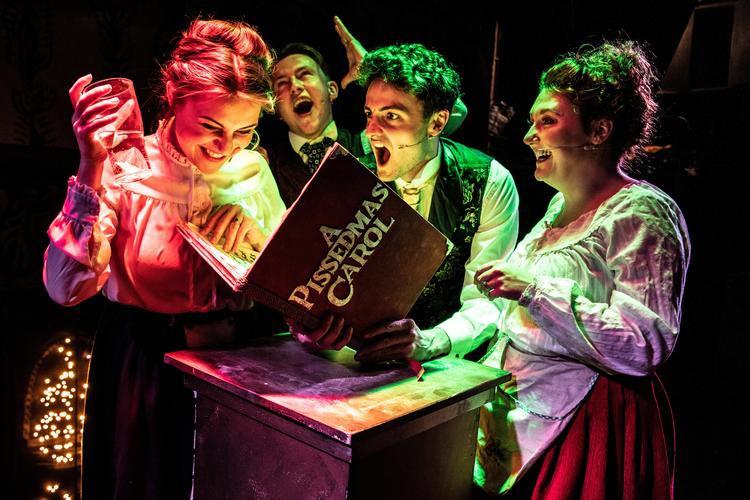 Generally, one doesn’t tend to get drunk to the point of inebriation just prior to attending a night at the theatre. However, this is where the magic happens in the hour long show, currently in situ at the Leicester Square Theatre.

Putting a spin on a Christmas Carol, we follow an alternative telling of this classic tale in the most seasonally way possible! Sh!t-Faced Showtime present a Pissedmas Carol, featuring an ever-revolving cast, a LOT of alcohol and raucous laughs a plenty.

To ensure that the alcohol is actually that we see at the beginning how much is consumed and the on the evening I attended, Daniel Quirke was certainly under the influence.

The cast take on multiple roles and switched seamlessly and fluidly into their characters, no easy feat when one has had a few for the journey between Christmas Past, Present and Future…
The space in the theatre is intimate enough for all to be fully involved, this is an interactive piece and there is plenty of audience participation. To ensure that there isn’t any chance of sobering up, there are mid-show treats to help the cast and audience along their way.

A Pissedmas Carol is fun and celebrates all the good things about Christmas, culminating in a jolly old sing-song with a twist to a Fairytale of New York, Walking in the Air and Last Christmas.

I only have one criticism of this piece…it wasn’t long enough! A stonking 4 out of 5 stars.