A suicide. A lie. The unexpected. 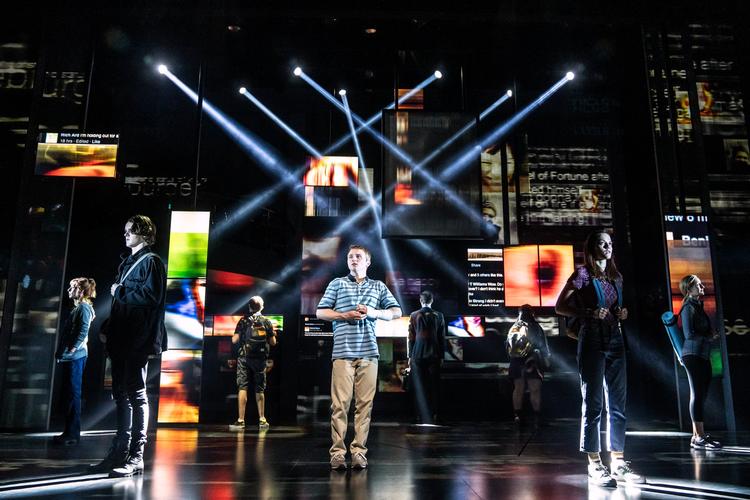 Evan Hansen (Sam Tutty) suffers from social anxiety. He lives with his single mother (Rebecca McKinnis) and spends most of his time in his bedroom. One day, he fabricates a relationship with a suicidal classmate Conner Murphy (Doug Collin) to become closer to the boy's family. From writing letters of encouragement to himself, to creating a fake email account of the deceased student's relationship with him, with the help of a family friend, Jared (Jack Loxton). Evan wins the love and affection of the family (Lauren Ward and Rupert Young) as well as fulfilling his fantasies on Zoe (Lucy Anderson), the deceased's sister. He also becomes very popular thanks to a social media and Kickstarter campaign, made with the help of Alana (Nicole Raquel Dennis).

Dear Evan Hansen is a story of our days, and many people will be able to relate to it. Yes, it touches some topics like young people’s mental health, parenting and the intricacies of the internet, but most of all, it is a story about a lie. An innocent lie that soon spins out of control.

If Pasek and Paul’s score sounds a bit samey, basic, and not memorable with "Waving through a Window" being the major exception, the sleek set is, instead, sublime. Some panels and screens, designed by Peter Nigrini, are innovatively used with projections, images, and words that follow the story. This idea brings to life the dark, minimalist stage.

Evan is not a particularly likeable character. All the sympathy for him is gone as soon as he starts to exploit the lie, to get what he wants. I could not find any deep message or something to learn; instead, it was frustrating to see Evan stuck in lies after lies. Luckily, the show is full of comic moments, especially the “imaginary” conversations between Evan, Conner and Jared (who is the most hilarious character).

Sam Tutty puts his all into the performance. We saw him last summer in “Once on this Island” and we had no doubt he was going to fly soon. And he did. He is an extraordinary actor, with a perfect combination of gestures and facial expressions and with an immaculate control of his voice. He is simply a perfect Evan Hansen.

It is quite a small cast for a West End show – 8 actors in total, and they are all great.

Dear Evan Hansen is an entertaining - and filled with talent - show, that will have a long life in the West End. And this is not a lie.