Reputation - Review - The Other Palace 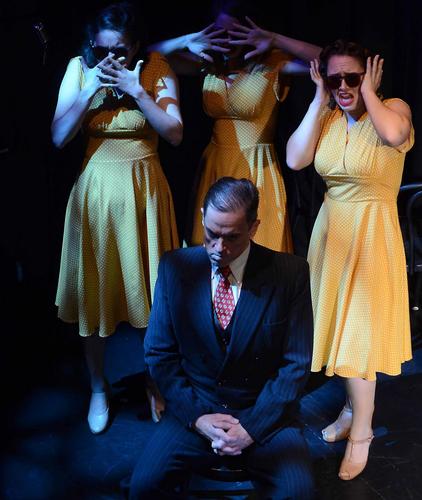 Receiving its premiere at The Other Palace, Reputation is a new retro musical by Alick Glass. Set in Hollywood in the late 1930's Freddy Larceny is a con artist who steals Michelle Gold's script and claims it as his own, receiving all of the credit. This story of plagiarism and the female struggle for equality follows Michelle as she fights for recognition and to get back her stolen work.

This new musical is heavily influenced by the 1930's jazz and swing style of music complete with clever harmonies reminiscent of classic war-time music. The score, by Alick Glass, is generally light-hearted, easy listening but main character, Michelle does get some emotional songs too to add to the mix. The production, which is still early in its workshop stage, tells Alick and Suzanne Glass' story enthusiastically and in a fun manner.

Jeremy Secomb plays the mafia inspired 'baddie' Freddy Larceny with conviction. Ever the risk taker, Freddie clearly has no remorse for his actions as he opens the show and the audience is shown flashbacks of what happened. Maddy Banks is extremely good as Michelle Grant. She plays the young student very well, full of passion and commitment for her writing and showing the indignation she feels upon finding out that her work has been stolen. Her vocals show good depth and her delicate tone works really well for the character. Ed Wade's Archie Bright is wooden, fumbling and straight laced - the perfect addition to the other slightly cheesy obvious characters. He brings out a more endearing side to Michelle's character and this relationship could definitely be developed further. The cast are all very capable of the direction given to them and display good vocal technique but at times the acting is almost too caricature and overly dramatic - perhaps, however, this would be less obvious in a larger space.

The concept for Reputation is definitely an interesting one. Whilst perhaps not the most innovative, the storytelling works well and it is certainly an easy watch. A lighthearted new musical, Reputation is unlikely to take theatres by storm however it is perfect for those wishing to escape their troubles.

It runs until 14 November