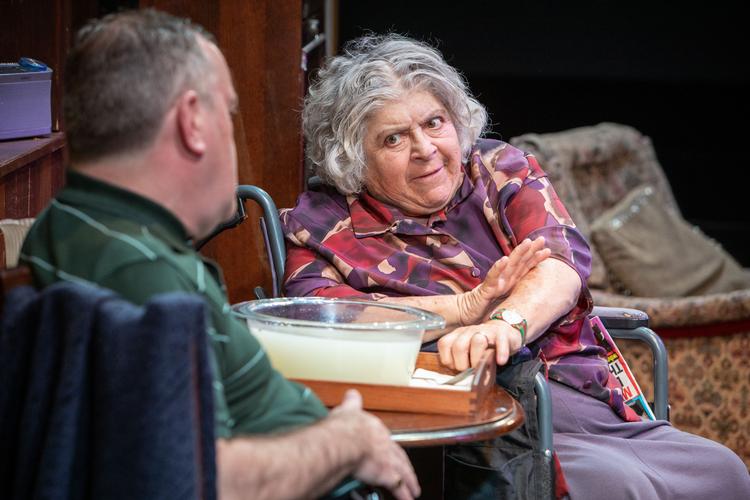 Living in the East End of London amongst broken TV-sets, radios, dryers and all sorts of broken bits we meet Sydney (Mark Hadfield) and Nell (Miriam Margolyes). This mother and son relationship is fractured by the ghosts of their pasts, and neither of them is willing to budge with forgiveness for one another. Nell favours her Irish carer Marion (Vivien Parry) over the help of Sydney’s, and soon Marion finds herself being manipulated by both in a row over the family inheritance.

The broken electronics reflect the play well, a nod to designers Max Jones and Ruth Hall, where nothing is fixed and new casualties are added to the pile.

O’Hare exercises his imagination the best by finding insults one has never heard of and making even the standards ring new in this black comedy. He certainly makes you laugh with the dialogue and the awful dynamic between a mother and a son. Yet I wondered if there is any more substance beneath all the mud throwing?

We do learn about a deceased disabled brother and the trauma it has left both on Sydney and Nell, and we are threatened by elderly domestic abuse and the struggles of living in isolation. These seem to be throwaway remarks, as the story flatlines with its dialogue full of insults and never really goes beneath the surface to really tackle the deeper issues causing the broken relationship between the mother and son.

Luckily director Phillip Breen comes to rescue with his well-paced direction, which almost covers up the shortcomings of the script by keeping the dialogue rolling at such pace so you will only feast on the banter.

The cast of three are solid throughout the play but as the play lacks nuance it seems that unfortunately they are left to play one note throughout the evening. Miriam Margolyes and Mark Hadfield have chemistry from the get-go, and the sparks fly with ease between these two. Margolyes is sharp and quick-witted, portraying all this with verve, but she is also able to hint sadness, even vulnerability, in the brief moments when she is alone on the stage. Hadfield captures his loner character well, but again you hope there were more in the script for this actor to grip his teeth in. Vivien Parry stirs the pot with her “I’m a good woman” characterisation that strikes the best contrast in the play between its two leads.

Unlike Tracy Lett’s family drama August: Osage County filled with verbal abuse and the ghosts of the past, which are released and exploited to full potential, Sydney and the Old Girl relies on great acting and good direction that cannot save the flaws of the play itself.