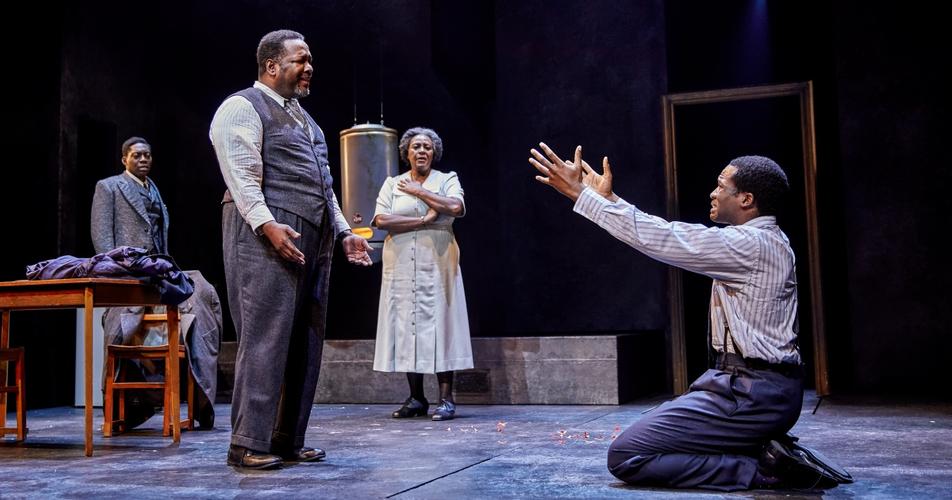 Newly transferred from its lauded Spring season run at the Young Vic, directors Marianne Elliot and Miranda Cromwell bring their seminal production of Arthur Miller’s classic Death of a Salesman to the Piccadilly Theatre for Autumn.

Any production of Miller’s tragic, dramatic tale of the downtrodden Willie Loman and his desperate, seemingly hopeless struggles to make a living for his poor family passionately condemns the condescending nonsense of The American Dream, and the cruelty and abuse wrought by the excesses of capitalism on ordinary people – but this extraordinary reinvention confirms the long-held suspicions of many that Willie’s is a uniquely black socio-economic struggle by casting the Lomans as a black family from the South, eking out subsistence in the hurly-burly of 1930s’ New York, in the aftermath of both the Great Depression and the 1920s’ black cultural revolution throughout the American North.

Elliot and Cromwell’s production is immediately enhanced with thematic urgency and with the depth of black history, one shared with a rich literary tradition of novels and plays, and which now seems so acutely necessary to any true grasp of this play than any other, white, staging of Willie Loman’s struggles comes off as almost wilfully ignorant and sorely lacking by comparison. Every aspect of Arthur Miller’s text is powerfully reinvented and reinvigorated, remade into a stirring clarion call against not only economic injustice, but all forms of racial discrimination under capitalism, and is rendered spectacularly better for it.

Leading a stellar cast with an outstanding performance is Wendell Pierce as Willie Loman. His new incarnation of Miller’s tragic hero masterfully embodies a unique shared history of distinctly black economic and social relations, brilliantly capturing a wonderfully complex interplay of forces bearing down upon him from within and without, his dogged adherence to the romantic notion of the American Dream always battling against a simultaneous harsh reality which he is endlessly driven to deny. Immediately commanding a powerful stage presence, Pierce’s Loman is by turns hugely energetic, funny, deeply complex and conflicted, and full of palpable grief, frustration and anger ever-simmering beneath his seemingly happy exterior.

Sharon D. Clarke as wife Linda Loman beautifully performs a much-needed voice of calm and reason to Willie’s exhausting, hyperactive ambition, skilfully concealing her own pain and sorrow to play the dutiful, supportive wife – a sorrow which, when it fully emerges in the play’s most affecting scenes, is superbly realised. Together, their warm and loving relationship in their time together on stage, in bad times and good, is a heart-warming joy to behold, and full of great chemistry between the two.

The boys of the Loman family are strong in their turns as well, with Sopé Dìrísù’s Biff commanding a great presence and energy of his own alongside Natey Jones’ compelling Happy. In them both, resonant – indeed, renascent - themes of black struggle, and the attendant political contest of the means of liberation, persist. If their father is a Booker T. Washington type, intent on servile negotiation with the system, Happy is W E B Du Bois, determined to brook no restrictions on black freedom or enterprise, with the ambitious, soulful Biff instead a latter-day Marcus Garvey, insistent upon a need to get away from the capitalistic cruelties of city life to seek independent success away from New York’s hotbed of white prejudice, and from a system that demands he succeeds only on its own terms. Jones and Dìrísù both perform with a keen awareness of this intertextual historical significance, and infuse their respective characters’ noble ambitions with a resultant richness, urgency, and complexity which it is a pleasure to watch, both actors transitioning skilfully from embodying their father’s fond hopes and dreams for them, to the pains and frustrations of their imperfect real lives.

Through Charlotte Sutton’s superb casting sensibilities, the Loman men’s struggles for success are ingeniously further situated as a struggle – both to beget and to be liberated from – proximity to whiteness. Whether by Willie leveraging the dorky white Bernard’s (a meek, earnest Ian Bonar) greater access to education for his underachieving son Biff, a literalised, torrid affair with whiteness embodied in Victoria Hamilton-Barritt’s seductive Woman, Joseph Mydell’s memorably enigmatic, gregarious Uncle Ben - dressed head-to-toe in conspicuously white finery whilst promising Willie diamonds for evermore toil - or the insensitive evil wrought by Matthew Seadon-Young’s cruel white boss Howard, the supporting cast is full of standout performances, enriching the drama and providing the play’s final revelation – that this essential release from capitalism’s myriad racialized cruelties comes, tragically, to mean very different things for Willie and his family - almost unbearably powerful, shocking dramatic effect.

Particular praise must go to set designer Anna Fleischle, whose singular, beautifully complex work has created something which seems as fluid and alive as any other character on her stage. It glides gracefully from scene to scene without interruption, with Aideen Malone’s dynamic lighting moving and changing just as seamlessly, much of it poignantly evocative of grim cold, and of a desolation both spiritual and material which is implicitly shot through the play’s text, made explicit by this wonderful design. Fleischle’s efforts seek to embody Willie’s erratic, panicked thoughts as he struggles with his patriarchal duty to his family, and his experience in a world which renders him small and insignificant against its own uncaring vastness. Fleischle’s spectacular achievement does just this, whilst also seeming to capture as well the transient, unstable nature of black life itself under such deplorable economic and social conditions. Hers is a truly masterful achievement, deserving of the highest commendation.

Further manifesting the compellingly rich world of the play is the superb soundtrack, which pays loving tributes to both the bluesy jazz of the 20s’ Harlem renaissance and to the beautiful, soulful singing of the black gospel tradition, with tense and foreboding original composition underscoring Willie’s tragic tale in-between. Some fine costume work helps last of all, though not least, to put the final touches to a singularly brilliant production, which is never without tight direction from Elliot and Cromwell and consistently high energy from the spectacular cast. Although some transitions, particularly between penultimate scenes, seem somewhat out of step with the fluid grace of others, and energy may perhaps falter in places for having so often been taken to such extremes elsewhere, these are no detriment overall.

This incarnation of Miller’s most famous work is a superlative tour-de-force in every respect, a definitive theatre experience which is more than worthy of the standing ovation it received, and that deserves to be seen again and again.