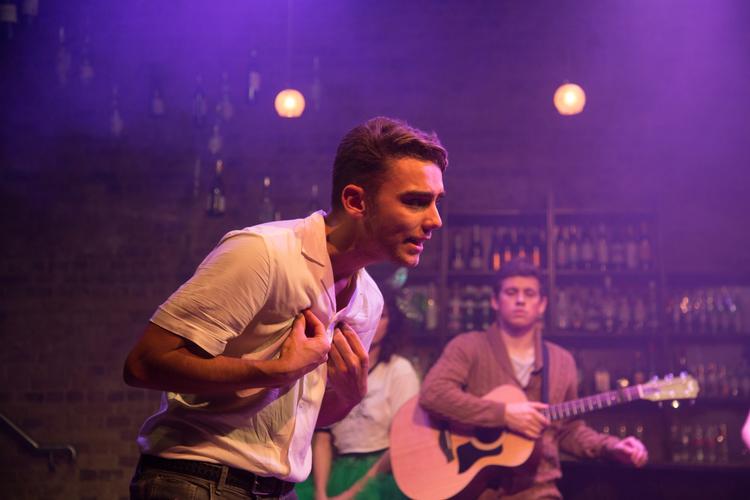 Jo (Julie Atherton) arrives at the refurbished the pub (The Green Fairy) where she used to work, for their open mic night. She sees her daughter Wendy (Emma Kinney) singing for the first time. They are two strangers now and to understand what has happened between them, the Green Fairy (Georgina Hellier), takes Jo on a trip back through time.

Jack Sain has written and directed with elegance a story about queer parenting, coming to the Union Theatre after a successful workshop with Lucie Jones and Declan Bennett at the King’s Head Theatre.

The folk score is catchy and performed with full commitment by the cohesive and multi-talented cast, who never leave the stage. All six actors move around the space, perfectly using every corner of the Union Theatre, many of them playing instruments and warmly singing at the same time.

Every mood has been reflected beautifully by the excellent, magical lighting of Alex Lewer. This, together with the simple but cozy set, designed by Katharine Heath, gives a sense of intimacy and familiarity with the story, and the characters. Julie Atherton gives an honest performance as Jo, unable to make the right choices, struggling with her mental health and alcohol misuse, and she brings humour and likability to what should be a dislikable character.

Most of the songs are easy to listen and to like, and some of them – "Animals", "Dark Paradise" and "Sticks and Stones", are really beautiful, while "To Hollywood" seem a little bit out of context for this pub musical.

The Green Fairy is a realistic and different musical. It doesn’t shout or leave you speechless because of special effects but it is an entertaining and emotional story about love, parenting, life’s choices and much more.

Similarly to A Christmas Carol/ It’s a Wonderful life – it is a story about redemption, perfect for this time of the year.