An intoxicating musical about love, loss and spirits 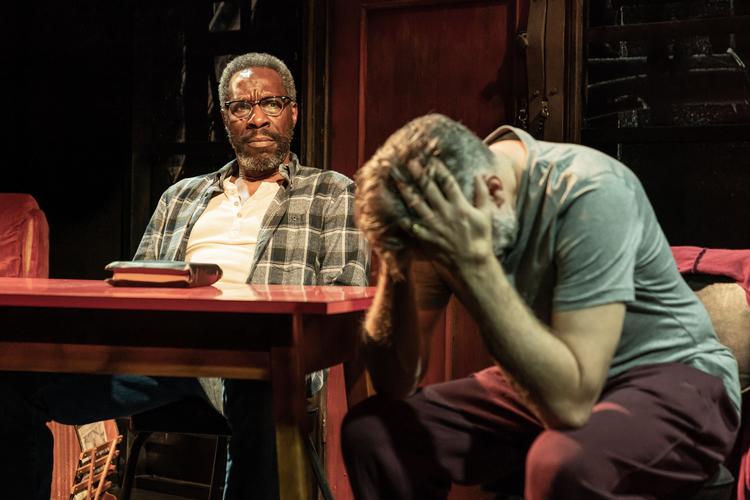 Structured more as a theatrical song cycle, Dave Malloy's Ghost Quartet is a 'Kaleidoscope journey' of love, betrayal and whiskey that questions and explores the nature of storytelling and the basic emotional instincts that make us human.

The new Boulevard theatre is the perfect venue for this show, as it's intimate space, with a stage in the round, really draws the audience into the stories being told. This was especially effective with the shows playful audience interaction, getting people to join in with percussion and living up to the promised focus of whiskey, as multiple glasses were handed out to audience members during one particularly entertaining scene. All of this made for a very real experience where it felt as though the actors were there just to deliver a personal message.

The abstract story follows Rose and her tale of love, betrayal, vengeance, and ghosts. And it does this while spanning centuries and generations portraying the nature of humanity and storytelling that have stayed constant throughout time.
We are told this through a beautifully harmonic score and witty but equally compelling dialogue that truly transcends our known reality, asking audiences to suspend their disbelief and spend an uninterrupted 90 minutes bathing in this marvellous musical creation.

Bill Buckhurst's direction is beautifully simple and keeps our attention on the text and lyrics that are surprisingly relevant to a contemporary audience, with subtle comic nods to the negative impact of technology, emphasising the importance of human contact and again, stories.

Caryl Bawden, Maimuna Menon, Niccolò Cuttadi and Zubin Carla make up the 'Ghost Quartet', and are all hugely talented with voices that harmonise beautifully with each other. And as if that wasn't enough, they all play a multitude of instruments throughout the show accompanying themselves and weaving each instrument seamlessly into the storytelling, thanks to Buckhurst's direction.
Maimuna Menon specifically stands out with her fantastically engaging acting and a voice that was shown to be so versatile as she switched between her jarring ghost-like vocal qualities and contrastingly gentle moments.
Carly Bawden also has a beautifully unique voice that married perfectly with Malloy's music. Which in itself is a breath of fresh air amongst the sometimes unimaginative scene that is contemporary musical theatre. And it is his distinct sound that makes him stand out amongst today's composers.

Simon Kenny's intricate set design managed to fit so much detail on such a small stage without it being too cramped. The whole design had a very vintage feel.
Furthermore, Emma Chapman's lighting design was simplistic and impactful.

The complex cross-generational plot was at times difficult to follow, and the multi-roling cast occasionally made it difficult to decipher where along this journey we were. But this was cleverly commented on throughout, and by the play's final moments it became clear that it wasn't the far fetched content of Malloy's story that was important but the constantly reappearing focus on the basics of human nature and all stories: Love, Life, Death, Betrayal and of course whiskey.