A circus aimed at children aged 4-10 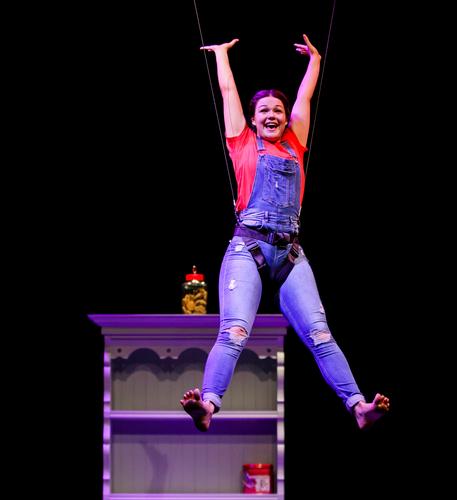 Lavrak are a female-led, alternative circus company based in Bristol, and Little Lavrak is the children focussed side of the company, their tagline being ‘Extraordinary Circus For Little Ones’. They aim to create an empowering and enabling circus for their audience, by incorporating contemporary dance, theatre, live music, and circus.

The company is managed by its two Co-directors, Amy Nicholls and Nicole Pretlove. Amy produced this production of Reach, at Circomedia, and performs with Zoë Larsson and James Arscott. I attended the performance with my 9-year-old daughter and 4-year-old son who were very excited to be joining me for this.

Circomedia is a beautifully converted church building on Portland Square, Bristol, and makes a stunning and intimate venue for performances of this nature. On arrival at the venue, we were greeted with the wonderful smell of freshly cooking popcorn, much to the delight of my daughter. And of course, what trip to the circus would be complete without popcorn!

We were shown through into the performance area which combined tiered seating at the rear (surprisingly comfortable for this style), and a large area of padded mats directly in front of the performance space for all of the younger children to be able to sit right in the heart of the show – naturally this was the last I saw of my children until the show was over!

The show was introduced as a ‘relaxed performance’, enabling people to move around if required and leave the room for a time if someone was finding it all a little overwhelming. This makes Reach an ideal show for families who have children with additional needs, and who may often find something of this nature a difficult prospect. In addition to this aspect, the show itself is without speech, further strengthening its suitability for any and all audiences. The company even offers BSL interpretation for hearing impaired audiences.

Reach itself lasts about 45-50 minutes, which is ideal for younger children, long enough to tell a story, but not so long that boredom or fidgeting becomes a major issue. The story includes three performers, one male and two female – and tells the story of the Amy, Zoe and James, and their epic quest to get their hands on a jar packed full of tempting cookies – the difficulty being that they are very little, and the jar is on the top of a very high cupboard.

The 45 minutes is essentially the series of attempts made to reach the jar, using a wide range of props and skills that has the performers dancing, climbing, running, jumping, and using a variety of aerial skills to ‘fly’. Ropes and rings hanging down over the stage are used beautifully by the two female performers who are clearly very skilled in their art, and they rise and fall gracefully as they attempt to reach the cookies. This is all delivered in a gentle, smooth and calm way, with the rise and fall being controlled by a counterbalance technique by the male performer who is himself moving up and down in the wings.

Throughout the performance, we see their undoubted aerial skills, beautiful contemporary dance, and great gentle comic acting – every facial expression being delivered by all three performers with clear intention and timing. The whole performance is accompanied by a very simple and enjoyable music soundtrack, which adds to the sights being seen, but never distracts from them, and importantly never irritates the viewer.

There is a huge sense of accomplishment when they finally complete their task, and by this point, the whole audience, children particularly, are so invested in the outcome, that you can sense everybody sharing their joy with them.

Overall, this is a beautiful and charming piece of children’s entertainment, which delighted my 9-year-old as much as my 4-year-old. It is a simple story that can be followed by all ages and abilities, delivered through a wonderful and exciting medium of circus skills. Having sat behind an older couple there with their grandchildren, and hearing their reactions throughout as well, it is clear that this truly is fun for the whole family, and it is delivered in a way that has absolutely no barriers to enjoyment for anyone. We travelled from South Wales for this performance, and would happily do so again, though I would love to see the company visit some Welsh venues with this and future productions.

Highly skilled children’s entertainment in its most inclusive form, that I am sure would sell out anywhere they choose to tour with it.