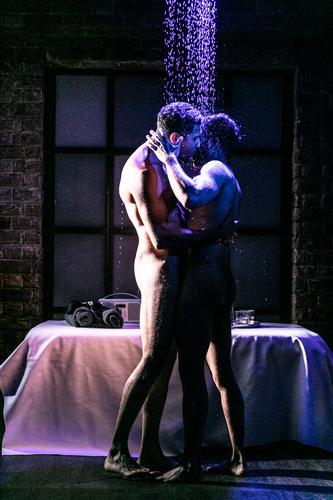 Monogamy. For many in heterosexual relationships, it is assumed that monogamy will be the rule. There is much more discussion about it in gay couples. "What do want from each other? Will our relationship be monogamous? If not, what rules shall we set?" Many gay couples have an "open" relationship, meaning sex outside the union is fine so long as certain guidelines are followed — for example, no sex with an outsider more than once, or no unsafe sex.

After a successful run at Southwark Playhouse, Afterglow, by S. Asher Gelman, is back for a second London season, this time directed by Steven Kunis.

There is a lot of nudity in the play. The characters are often literally and metaphorically naked because Darius enters in the life of Josh and Alex like a tornado, and the couple will finally have to talk openly about their relationship and decide what's best for them. They have such intimacy and chemistry that, thanks also to the honest dialogues, and we feel as if we have known them for a long time: the story feels realistic and true.

The production is fast-paced, and it keeps the audience engaged even if you can see where it is going.

The three actors play their parts well, moving swiftly from neediness, to control, to vulnerability. All of them have to take apart and reassemble different configurations of the set, designed by Libby Todd, between scenes; the fact that the actors have to do all of the scene changes themselves makes the energy of the play to drop at times.

There are no answers in Afterglow, but it raises so many questions in the audience – particularly to gay audiences. And these questions are not often explored in theatre. But it is also an honest piece of theatre about the universal themes of love, sex and marriage, and everything in between.

It runs until 24 November.