A dark new tale of trauma 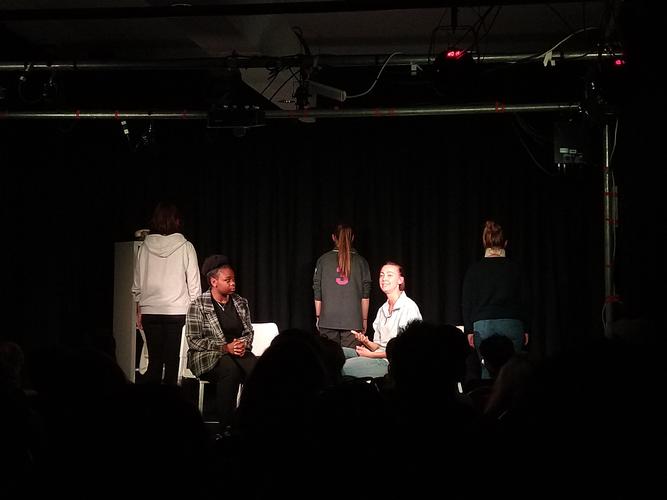 The first stage offering from new theatre and film company Rebel Act Productions, Follow My Fingers presents a strikingly dark, introspective tale of deep trauma and painstaking recovery for one young woman and her group of travelling friends.

Writer, director, producer, set designer, and lead actor Hannah West turns in a fine performance as Heather, skilfully alternating between pre and post-traumatic incarnations, one happy, bubbly, upbeat, and confident, and the other robbed of all enthusiasm for living as the work progresses, with Hannah West’s own minimalist set design fluidly intercutting from Heather’s variety of recollections to her time in therapy.

Many strong performances also litter the ensemble cast West has assembled for the work, nearly all female save one, and remarkable for the refreshing variety and depth of women’s personalities on display. Abigail Davies is a memorably mousy Sally, a pious woman of God, Hanna Durham’s Claire is a wellspring of humour with fine comic timing, Sophie Hill’s Annie provides a loud and boisterous counterweight to Sally, and Jessikah Wilson has an excellent manner with her client as Heather’s therapist, alongside smaller roles.

Meanwhile, Jamie Basardi’s solitary male presence displays great range as he convincingly performs a variety of different characters in vital bit-parts. Ably assisted by movement director Marlie Haco, the women in particular are all wonderful actresses, possessing great skill in transporting the audience from the confines of West’s sparse set surroundings into a variety of convincing scenarios and locations without the aid of extravagant sets or props, instead using movement and performance to create a variety of visually striking tableaus.

West’s writing is first-rate, too, with her script mounting in palpable tension and dread before finally exploding into an emotionally harrowing crescendo of traumatic shock and grief which makes a real, visceral impact. Her script is full of energy, warmth, humanity, and humour, and explores everything from the prior build-up to the traumatic event itself, the aftermath, and the long, slow road to recovery. In all this, she shows great emotional sensitivity and a pleasing depth to her research of a charged and delicate central subject – her title, Follow My Fingers, is itself derived from the trauma therapy technique of replicating the rapid eye movement of dreaming to process shock in Eye Movement Desensitization Therapy.

Indeed, some of the more dramatic moments seemed so authentic and powerful that audience members were moved to tears. Though, perhaps, West’s talent for writing striking moments is a touch too great, as the play could’ve ended at several prior points in the last few minutes with no loss of quality; and, initially, as the play warms up to its impactful moments, the lighter writing seems to be very conventional youth travel story fare – but the larger dramatic moments at which West excels, and her talented cast, help to elevate the work beyond the usual standard, and its sincere, nuanced exploration of trauma by way of a conventional travel story is a refreshing twist which gives these proceedings an impressive narrative depth and broader socio-political importance in our age of sincerity and openness about mental health.

Of great help to the depth of immersion in the tale is Zoe Smith’s sound and lighting together with Hannah West’s set design. The performance space makes an immediate impact, with its sparse and minimal white furniture visually striking against a sheer black background, which together with the cast unabashedly using the seating gangway as staging unto itself in a very enclosed space evokes the themes of intimacy and exposure very well. So, too, is there music on offer from the brother-sister duo of Sam and Hannah West, which joins the other elements of sound design in both adding to the initial lightness of tone and furthering a sense of later trauma, as Smith’s sound design gradually melds it into a disjointed cacophony of noise as Heather’s mind itself becomes a more confused and shaken environment.

A very well put-together, dramatic, and emotionally impactful work full of strong writing, wonderful design and great performances. As a very first theatre outing for a newly-formed company, Follow My Fingers is certainly an excellent, impressive initial effort. One looks forward to seeing where Rebel Act Productions, and the multi-talented Hannah West, go from here.