An autobiographical musical by Jonathan Larson 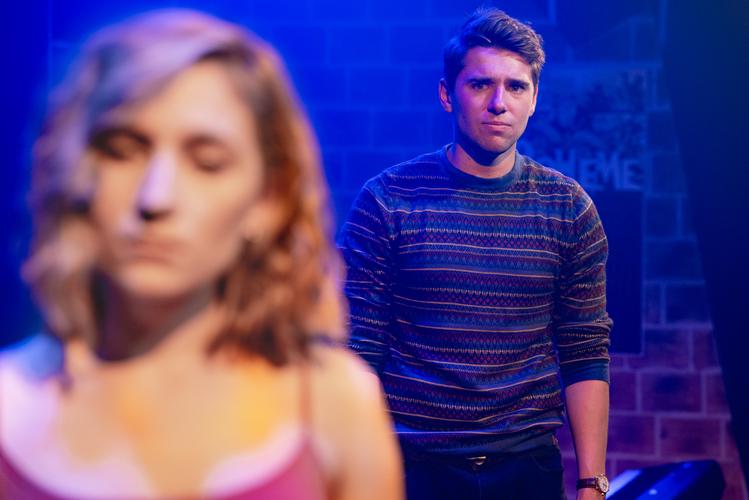 Never has 97 minutes of  5* musical theatre been more worthy of a 340-mile round trip!

As a huge fan of Rent since seeing it for the first time in 1998 – the first of many viewings – I jumped enthusiastically at the opportunity to write a review on Tick, Tick...BOOM. It was like fate! For years I have been hoping that someone would give it another outing, and the team at The Bridge House Theatre has certainly achieved an outing not to be forgotten.

Tick, Tick...BOOM tells the story of Jonathan Larson himself, and his struggles to get his promising career off the ground. It was originally written to be delivered as a solo piece by the great man himself, but after his sudden death in 1996 it was re-imagined as a three-hander, with characters Jon, Susan (his girlfriend) and Michael (his best friend).

The whole story takes place over the week leading up to his 30th birthday; a very anxiety-ridden week for him because it also included the workshop for his current project, something that he knew could shape his future.

For those of you that have seen and loved Rent, you will know how adept Jonathan Larson is at taking you on an emotional rollercoaster through his storytelling, and in that respect Tick, Tick...BOOM delivers that exact same experience.  Larson has a skill for creating characters that you very quickly fall in love with. Who can forget the amazing Angel in Rent? And in this case, the main protagonist being Jonathan himself.

Like Rent, the script centres around the complexities of life when things are challenging for the three main characters, but with a strong emphasis on how friendships and relationships can impact this. One of the reasons Rent has always been my favourite is that Larson’s understanding of friendships is absolutely beautiful. Now having seen the autobiographical Tick, Tick... BOOM, I now know why: the depth of friendship he experienced in his own life with Michael.

This production by Guy Retallack, Jamie Ross and Rob Harris,  and the rest of this very gifted team, is wonderful in so very many aspects.

The venue itself is a very cosy and intimate room. This alone lends itself to such an intimate show. Larson loves to draw his audience into his story, and here you are not only emotionally drawn in, but also physically. You feel almost as if you are a part of the story itself because you are actually sharing the same space as the characters.

The production team have beautifully choreographed every movement and sound, something that is probably so much more important in such a compact space. In particular, I was blown away by the skill of the sound (Phil Lee) and lighting (Richard Williamson) throughout the performance. Every sound effect and lighting effect was pinpoint in its accuracy and lent a lot to the overall feel of quality.

Moving onto the cast, the choices for the main three characters was faultless. In Alex Lodge, Georgie Ashford, and James Hume, this team brings experience from all over the West End, appearing in the likes of Les Miserable, Book of Mormon, Beautiful and Mary Poppins to name but a few. This experience has developed great skills, highlighted by the equally excellent singing and acting by all three. Over the course of the show, they not only deliver their main character as well, but also other characters as and when required - on one particular occasion with great surprise and comic effect from James Hume! - I’ll say no more.

Alex Lodge had the wonderful task of bringing Jonathan (Jon) to life. In a style much like that of the character Mark in Rent, Jon plays both himself and the narrator to his own story, often addressing the audience to further add to the narrative of the journey he is on. Alex delivered this with fun and whimsical moments in both script and songs, in particular, the energetic and entertaining ‘Sugar’. He also delivered depth and great emotion, and this was seen at its best when he has sung the emotive ‘Why’ as the show headed towards its conclusion. When he finished singing, such was the feeling in the room that there was a delay in the applause (which then came with vigour) that I believe was because the audience needed a moment for the performance to sink in, and they were reluctant to break the mood.

James Hume had the pleasure of portraying Michael, a very warm and engaging character, and he delivered this with a gentle and deft performance. He too delivered his own beautiful vocal performance when he sang ‘Real Life’, emotion pouring from him at this pivotal point in his own personal journey.

Georgie Ashford was playing Susan, a very loveable and sweet young woman, with a fiercely independent streak. Susan is battling with her own feelings and fears throughout, and Georgie delivers this internal conflict and emotional journey with warmth and skill. Georgie also gets the pleasure of playing two of the more significant ‘other’ characters, Karessa (a character in the musical Superbia that Jon is workshopping) and Rosa, (Jon’s evasive, and slightly abrasive, agent). This gives Georgie and opportunity to show herself through three very different women, each delivered without fault - and perhaps providing Georgia’s best vocal moment as Karessa when she performed ‘Come to your Senses’, which was delivered with strength and vocal skill.

In addition to each of their individual performances, I particularly enjoyed their on stage compatibility. The friendships and relationships were so believable and natural - again a must-have skill when delivering Larson’s person-centered work. One particularly enjoyable moment was the high energy delivery of the somewhat angry song ‘Therapy’ - performed by Jon and Susan. This was certainly not an easy to perform number, with its back and forth high pace dialogue, and yet it appeared perfectly delivered. You could see the relief when they reached the end successfully and could take a breath!

Overall this was a brilliantly delivered production of a brilliant script and score that has not been given the opportunities it deserves in the UK. I would love to see this tour the UK, visiting the many more intimate and underused theatres, bringing a touch of Broadway to local theatres.

For anybody that is a fan of Rent, you need to see this wonderful piece of musical theatre before its run ends. You couldn’t fail to enjoy the show as it’s packed with the same ingredients of emotional highs and lows, with a skillful musical score to match. Personally I found it added an element of further understanding of Rent as it showed me a bit more of the author and his life influences.

This brilliant cast and crew have ensured that even in death, Jonathan Larson still has one of the most powerful messages to deliver to the world of musical theatre.

It runs until 27 October