The Open - Review - The Space

A story of a future Britain turned into a golf course 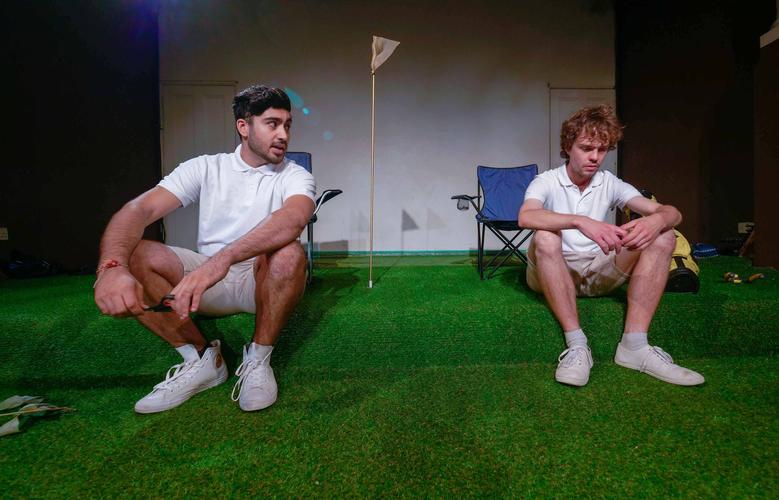 The Open is a new play by Florence Bell, who also directed, which is showing at The Space in London’s  Docklands. It started with an intriguing concept – that in 2050 (post “The Break Up, i.e. Brexit) the whole of the UK has been sold off as  a private golf course known as the GBGC (Great British Golf Course). The play therefore starts in the open air as Bella (Emma Austin) consumes champagne and strawberries in glorious sunshine. Registered caddies Arthur (Priyank Morjaria), a man dedicated to his work, and lovelorn Patrick (Tom Blake) tend the greens manicuring blades of grass with scissors. However, underneath the surface, all is not well. It transpires that Bella is one of the ruling elite, Patrick and Arthur are just pawns in the system and a glorified waitress Jana (Heidi Niemi) is, being an Estonian immigrant, the lowest of the low. Soon it transpires that these and all the other ex-citizens of the UK have become slaves to a repressive regime. Nobody is actually paid for working, people’s actions, conversations and even thoughts are monitored by the state and, in Jana’s case, she is in real danger of dying. And so, Jana, Patrick and eventually Arthur inevitably form a plan to escape.

All this is quite a promising premise but, unfortunately, I did not find that the production managed to pull off  the feat of ramping up the tension and engaging full interest. Inconsistencies in the narrative meant the whole thing foundered somewhat. The characters, within the confines of the writing, were well played - Heidi Niemi was particularly effective and affecting as Jana. However, I sadly did not feel enough of a connection with or empathy for the characters to really care about their fates.

The golf course setting was well done given the limited space at the venue’s disposal. The thrust configuration served to make the audience into witnesses/spectators as the drama unfolded. There was a major change for the second half (no spoilers) and again this was well realised. The real problem with Act Two, for me, is that the play blurred the timelines. This is fine if it serves to make a particular theme or idea explicit but here it just confused and alienated and I found myself becoming slightly exasperated with the over prolongation of ideas. Perhaps this is one of the results of a writer directing their own play; someone should have retrieved those grass manicuring scissors and given the script a rather hefty trim.

It runs until 12 October

A fuller version of the review appears here